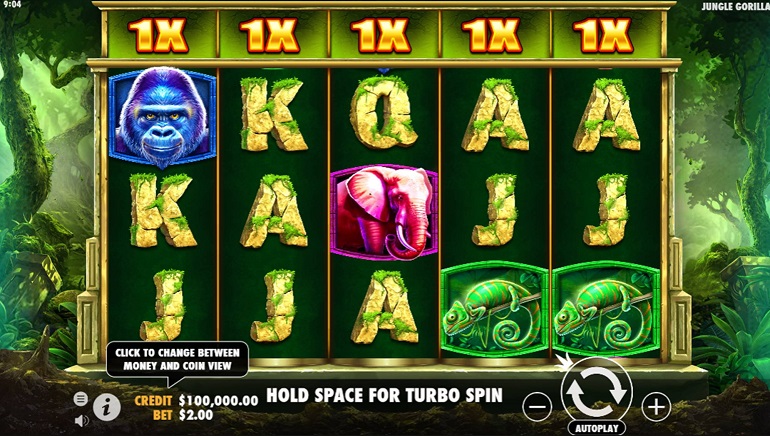 Jungle Gorilla from Pragmatic Play is a simple slot with an expansive theme. Wilds and scatters are the keys to scoring the game’s maximum win of 2800x the stake, but that’s as far as the special features go.

Jungle Gorilla is the new wildlife-themed slot from Pragmatic Play, and it features a gorgeous grinning gorilla as its star. Wilds and scatters are the keys to scoring the game’s maximum win of 2800x the stake, but that’s as far as the special features go. Still, there’s something to be said for the simplicity of a game that features such an expansive theme. Players themselves will have to be the judges: does Jungle Gorilla have just the right amount of action or not enough? Check it out at Pragmatic Play online casinos.

Jungle Gorilla is a 5-reel, 3-row, 20-payline slot that’s playable on all devices. It’s visually beautiful, set deep in the green jungle, with bright and captivating colors and a complementary soundtrack. The slot ranks 3 out of 5 on Pragmatic Play’s volatility scale and the RTP is quite decent at 96.57%.

Symbols include J-A royals covered in ivy, chameleons, parrots, elephants, tigers, and of course, gorillas. Gorillas are the highest paying symbol, rewarding 4.5x for a line of 5. Not much of a reward, but since multipliers play a large role in this game, that number can easily go much higher. There are also wilds and scatters that drive the multipliers upward.

Above each reel, there is a progressive multiplier that begins at 1x. Whenever the gorilla scatter lands, it raises the multiplier of that specific reel by +1. Multipliers can only go until 5x, even if more gorilla scatters land. Still, it’s a fun way of raising the value of the wins.

If a wild is part of a winning combo, the respective reel multiplier gets assigned to the symbol that created the win. If there is more than 1 wild multiplier on a win line, the values are multiplied, not added. Once the win is totaled, the multipliers get reset back to x1.

Jungle Gorilla is great when it comes to aesthetics and soundtrack, but it feels like something, just something, like a bonus round or even a respins feature, is missing. The maximum potential win of the game is 2800x the stake per spin, not a huge amount, but not bad considering that there aren’t any big bonus features. Players who enjoy minimalistic features but exciting themes will enjoy the simplicity and charm of Jungle Gorilla.