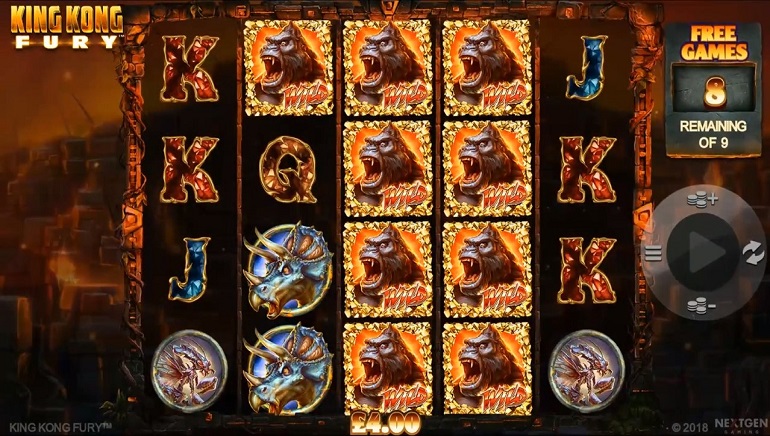 NextGen's King Kong Fury slot is all about the Free Games Feature - you can win up to 100 free spins and there's no limit on how many times it can be retriggered.

King Kong Fury by NextGen Gaming is based on the 2017 blockbuster, Kong: Skull Island. With characters from the film exploding off the reels, and of course, Kong himself, NextGen Gaming has done a great job turning the epic blockbuster into an action-packed, suspense-filled slot.

The King Kong Fury slot consists of 5 reels, 4 rows, and 50 paylines. Reel symbols include the film's heroine, a pterodactyl, triceratops, T-rex, a few other scary creatures, and letters and numbers. The T-rex is the highest paying symbol and can give you 10x your original stake when 5 land on a payline. Kong is the wild and can only land on the 3 middle reels.

In the base game there are 2 features that can be randomly featured:

In addition to the base game features, King Kong Fury has one incredible feature that can extend your gameplay significantly: The King of Skull Island Free Games Feature.

The feature is triggered when the bonus heroine symbol lands on reels 1 and 5 at the same time. This gives you 4x your stake, and you can then spin the statue reels to reveal multipliers between 3 and 10 free spins each. These values are then multiplied, which means you can win up to 100 free spins.

But what’s truly great about the free games feature is that you can retrigger it multiple times, with no limits as to how many free spins you can win.

Plus, during your free spins, the Raging Re-Spins feature can be triggered, during which a full wild stack remains stuck in place while the other reels re-spin. If more wild stacks appear, you’ll get additional re-spins with sticky wilds. Another surprise of the Free Games feature? The 2 base game features can also be triggered. In all, you can win up to 12,500x your original stake on each spin.