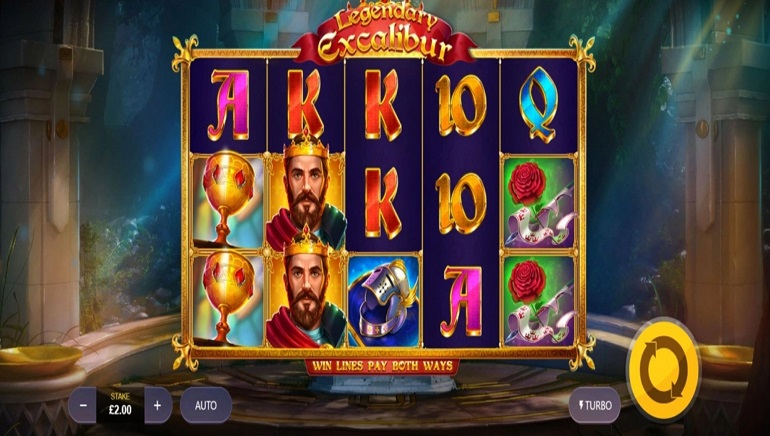 With only wilds and respins driving the game, Legendary Excalibur from Red Tiger Gaming is a slot that's best suited for players who enjoy simplicity or who are just getting their feet wet in the world of slots.

Legendary Excalibur from Red Tiger Gaming is a Medieval/fantasy-themed slot that’s set against a backdrop of a mystical chamber that houses the famed Excalibur. Unfortunately, the original story is more interesting than Red Tiger’s slot. With only wilds and respins driving the game, it’s a slot that's best suited for players who enjoy simplicity or who are just getting their feet wet in the world of slots.

There aren’t too many symbols on the reels in this game, another disappointment. With so many facets to the Excalibur story, it's a shame that Red Tiger didn't make more use out of them. The symbols that do grace the reels include A to 10 royals, a rose, a bejeweled goblet, a knight’s helmet, and King Arthur himself. King Arthur is the highest-paying basic symbol and rewards 50x your stake when 5 land in combination. There is also a 1x3 Excalibur wild that will nudge into place if it only partially appears on the reels. The wild also pays 50x your stake when 5 land across a payline.

When a full stack of Excalibur wilds lands on the reels, the Excalibur Respin feature is triggered. During this feature, the stacked wild remains in place and 1x1 wilds rain down onto the reels. A new payout is calculated after the new wilds land. Also during this round, if another reel gets filled with wilds, it also remains stuck in place and an extra respin is rewarded. If all 5 reels get filled with wilds, the max payout of 500x the stake will be awarded.

Legendary Excalibur is heavy on theme but light on features. People who gravitate toward this game will likely be lovers of the Camelot story or players who enjoy games that offer small, frequent wins. Since NetEnt acquired Red Tiger Gaming in September 2019, Red Tiger games are now available to play at NetEnt online casinos.