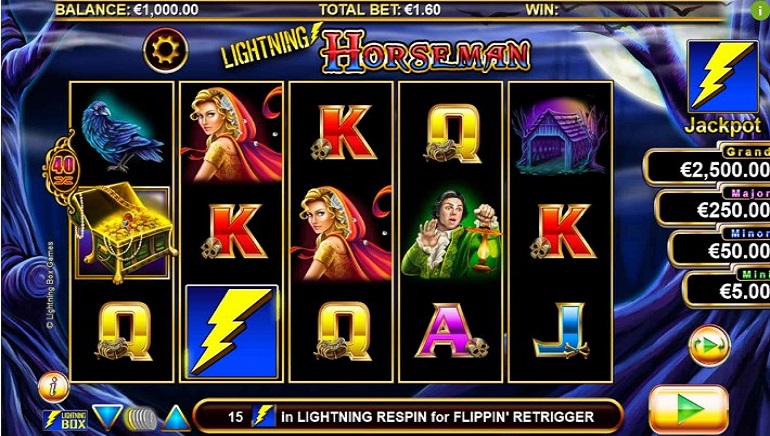 Lightning Horseman, the newest slot from Lightning Box Games, is a spooky slot that includes a Lightning Respins feature along with 4 jackpots.

Lightning Horseman, the newest slot from Lightning Box Games, is a spooky slot that includes a Lightning Respins feature along with 4 jackpots. Even the base game has the potential for some pretty big wins; when wilds fill up the entire grid, you can win 24,000x your stake.

Lightning Horseman is a 5-reel, 40-payline slot with an RTP of 95.52%. While the game is set against an eery, dark backdrop, the graphics are cartoon-like, which lightens it up a bit.

Symbols include a treasure chest, a cloaked blond woman, a startled man holding a lantern, a crow, a bridge, and lower-paying letter symbols. There’s also a horseman wild and lightning bolt scatter. When 5 wilds land on a payline, you win 600x your stake; if wilds fill up the entire grid, you win 24,000x your stake.

To the right of the reels there are jackpot prizes, and these are awarded randomly after the Lightning Respin flip. There are Mini, Minor, and Major jackpots, which can be won multiple times, and a Grand jackpot, which offers 4000x your stake and can only be won once.