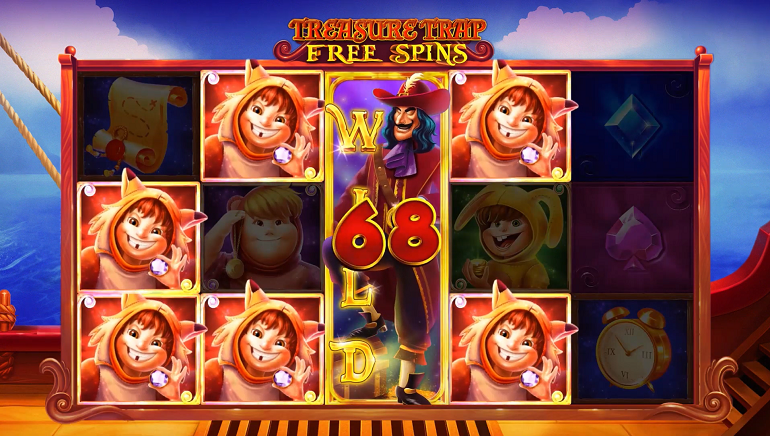 Lost Boys Loot from iSoftBet is a fun-filled slot based on Neverland’s favorite troublemaker and his posse. It’s loaded up with features, including 2 wild modifiers, 2 free spins features, and sticky wild reels with respins and increasing multipliers.

Lost Boys Loot from iSoftBet is a fun-filled slot based on Neverland’s favorite troublemaker and his posse. It’s loaded up with features, including 2 wild modifiers, 2 free spins features, and sticky wild reels with respins and increasing multipliers. The max win is 1,051x a player’s stake per spin, which is fairly good considering the game’s low betting options.

Lost Boys Loot is a 5-reel, 20-payline slot based on the beloved story of Peter Pan. Bets range from $.20 to $20 per spin, a fairly narrow betting range. Lost Boys Loot is considered a medium variance slot with an RTP of 96.01%, and it’s playable on all devices.

Lost Boys Loot comes with 2 fun wild modifiers: The Tick-Tock Wild Chomp feature and Tink’s Touch feature. In the former, the crocodile appears beneath the reels, and if the Captain Hook wild lands, the croc will jump out of the water and chomp him, causing the symbols beneath the wild to become wild themselves. In the latter feature, Tinkerbell magically appears and turns 3 to 5 symbols wild.

There are 2 free spins features that can be triggered in this slot: Dueling Free Spins and Hook’s Treasure Trap Free Spins.

Dueling Free Spins is triggered when 3 or more Peter Pan bonus symbols land on the reels. 3, 4, and 5 symbols reward players with 10, 20, and 30 free spins, respectively. During this feature, if a Peter Pan symbol and Captain Hook symbol land on the same spin, they duel and give you extra free spins or an increased multiplier.

Hook’s Treasure Trap Free Spins feature is triggered when a player lands an extended Captain Hook wild on reel 3. There’s a wheel to spin that awards 5, 8, 10, or 12 free spins. During the free spins, the Captain Hook wild gets locked in place on reel 3 and fires at winning symbols, locking them in place.

There’s one last feature in this iSoftBet slot, and that’s the Lost Boys Bonus feature. It’s triggered when the treasure chest bonus symbol lands on the reels. Players then get to pick from 3 treasure chests, which will reveal a cash bonus and trigger 1 of the free spins features.

Lost Boys Loot from iSoftBet is a valiant attempt to revive a cute classic, and the UK-based developer did a great job. Peter Pan and his familiar cast of characters will bring players back to pleasant childhood memories, and the action-filled gameplay will keep them delighted in the present. However, due to the low betting options, serious jackpot-hunters may not have what to look for in this slot. On the other hand, its cheery and colorful theme makes it a great game for recreational players. Check it out at iSoftBet online casinos.