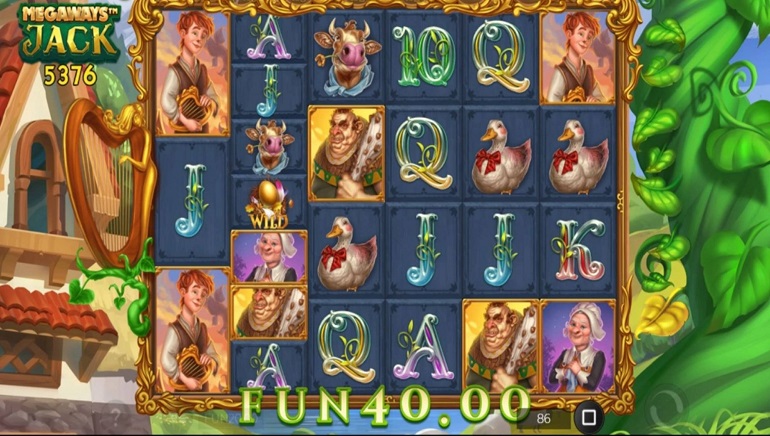 Megaways Jack from Iron Dog Studio is a slot centered on the fairytale of Jack and the Beanstalk. It utilizes the Megaways mechanic and features wilds, reel modifiers, and free spins.

Megaways Jack from Iron Dog Studio is a slot centered on the fairytale of Jack and the Beanstalk. It utilizes the Megaways mechanic, which creates more winning opportunities for players, plus there are free spins and multiple reel modifiers. Just as Jack was able to make away with some truly spectacular treasures from the giant’s house atop the beanstalk, Iron Dog Studio has given players the chance to walk away with a huge coup as well: 25,000x the stake per spin. Megaways Jack can be played at Iron Dog online casinos.

Megaways Jack is a 6-reel slot with a possible 2 to 7 symbols appearing on each reel and a maximum of 117,649 ways to win. The background features a house and a beanstalk and the soundtrack is whimsical and lighthearted. Bets range from $.20 to $20 and the RTP is a standard 96.2%.

When a win is scored, the symbols explode off the reels so new ones can fall, or tumble, into the open positions and create more potential for wins. Each successive win lets players climb 1 position higher on the beanstalk to the right of the reels. If players reach the top, the Free Spins feature is triggered (see below). Additionally, when a tumble occurs, magic beans can randomly appear. Each time they appear, players climb 1 position higher on the beanstalk.

Symbols include 9-A royals and a cow, golden goose, Jack’s mom, the giant, and Jack. The latter pays 25x the stake when 6 land in combination.

During the base game, the harp that hangs to the left of the reels can randomly award up 4 modifiers: up to 4 extra wilds on tumbles, up to a 5x win multiplier, up to 3 extra positions on the beanstalk, or a respin without losing beanstalk position.

When players reach at least the 8th position on the beanstalk, the Free Spins round is triggered, rewarding between 8 and 12 free spins with multipliers up to 3x. Free spins come with an unlimited multiplier that increases by 1 with each cascade. When 7 symbols land on a reel, the reel gets locked into position for the duration of the spins. 4 consecutive tumbles award 2 extra free spins and each tumble over 4 adds 1 more free spin, for a maximum of 4. During this round, the harp can still award wilds, free spins, and multipliers.

Where available, the Bonus Buy allows players to choose 6-10 free spins with or without a locked reel in position. The cost of this option ranges between 30x-130x the bet.

Iron Dog Studio made good use of the Megaways Mechanic in its new slot, creating little bursts of excitement every time a win is scored. The extras in the game — like the harp and beanstalk — contribute to the overall enjoyment. Of course, the max win of 25,000x the stake per spin is the ultimate golden goose that all players hope to win.