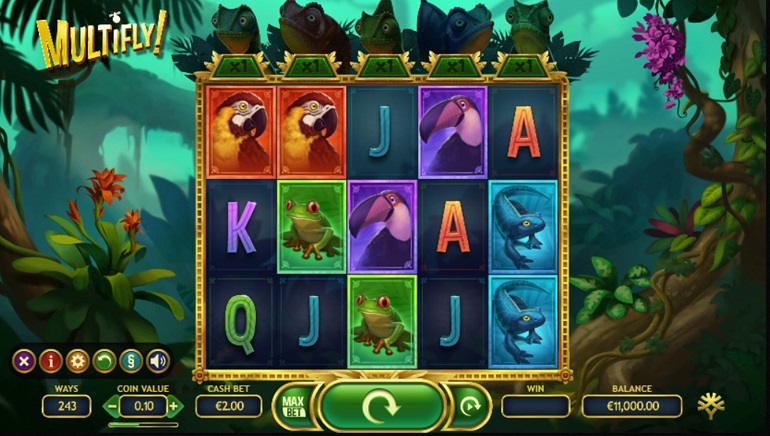 Chameleons aren’t usually the most beloved animal of the jungle, but Yggdrasil did a good job of bringing out this lizard’s true star potential. Wilds, reel multipliers, and free spins offer a riveting experience and a max win of 10,000x the stake.

Multifly from Yggdrasil is a new slot that’s set in the jungle and features all the animals one would expect to find — parrots, toucans, frogs, and the star of the show, those cute, camouflaging chameleons. The slot includes wilds that come with reel multipliers and free spins and has a maximum win of 10,000x the stake per spin. Fun, colorful, and with an aptly-suited tribal soundtrack, Multifly is a good option for recreational and serious slot players alike. Check it out at Yggdrasil-powered online casinos.

Multifly is a 5-reel, 243 ways-to-win slot that’s playable on all devices. Bets range between .20 to 100 per spin and the RTP is 96.3 percent. The hit rate is rather low at 17 percent and the slot is highly volatile, which means players can go for stretches without hitting anything. On the other hand, if players do score a win, there’s a chance it will be big. Wins are formed when 3 or more matching symbols land on adjacent reels starting from reel 1. If more than 1 symbol lands on a reel when a win is scored, a multiplier is applied.

Reel symbols include lower-paying 9-A royals and higher-paying iguanas, toucans, frogs, and parrots. The latter is the highest-paying, rewarding 4x the stake when 5 land in combination. There is also a wild and a chameleon scatter, both of which play central roles in the game.

When a winning combination lands, the Dropdown feature is enabled. This removes the symbols of the winning combo from the reels and allows new symbols to drop down into the empty spaces. Every time this happens, a wild is added to 1 of the winning positions.

When a wild lands on the reels, it triggers the Reel Multiplier feature. Each reel has its own multiplier, which starts at 1x, and when the wild lands, the multiplier increases by 1x. This mechanic means that several reels can have their own multipliers going at the same time, but the multipliers are only applied to reels that have symbols that form a winning combo.

When 3 chameleon scatters land on the reels, the Free Spins feature is triggered. Players are awarded 10 free spins and the feature kicks off with the reel modifiers that were in place when the feature was triggered. Multipliers don’t reset during this feature, which means they can only increase. In fact, due to the multipliers, players can hit the maximum win of the game in this round — 10,000x the stake per spin.

Chameleons aren’t usually the most beloved animal of the jungle, but Yggdrasil did a good job of bringing out this lizard’s true star potential. While it might not seem like the slot is brimming with features at first glance, the Dropdown mechanic and Reel Multiplier feature ensure that there is action even in the base game. Of course, the Free Spins feature is the ultimate aspiration, since this is where the max win of 10,000x the stake can be won.