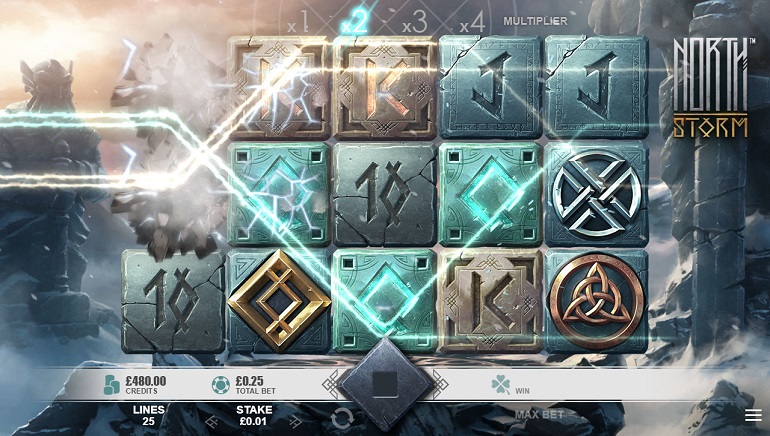 Rabcat's North Storm has terrific graphics and a chilling soundtrack. Features include cascading symbols, multipliers, and free spins, with a max win of 1000x the stake per spin in the Free Spins feature.

Bundle up and get ready to play Rabcat’s newest slot game, North Storm. Set against snow-capped mountains, the incredible graphics and chilling soundtrack will make you feel like you’re in the middle of a Nordic storm. Features include cascading symbols, multipliers, and free spins. Check it out at Rabcat casinos, online and on mobile.

North Storm is a 5-reel, 25-payline slot that’s playable on all devices. Bets range from $.25 to $50 per spin and it has a respectable RTP of 96.13%. North Storm is a medium variance slot with a max payout of 1000x your stake per spin in the Free Spins feature.

Slot symbols are set on hefty stone blocks that drop onto the grid with a satisfying thump. Symbols include 10, J, Q, K, and A and 3 higher-paying Norse emblems. The most rewarding symbol pays out 100x your stake when 5 land on a payline. There is also a dire wolf wild and a Free Spins symbol.

When you score a winning combination, the participating symbols disappear and new ones cascade from above to replace them. This is called the Bonus Falls feature. The cascades continue until no new winning combo is formed. Each successive fall adds to the multiplier, beginning at 1x and potentially going all the way until 4x.

Despite a darker feel than many of its other slots, the graphics and soundtrack in Rabcat’s North Storm are phenomenal. However, the gameplay doesn’t exactly match the caliber of the aesthetics. The cascading symbols, multipliers, and free spins certainly keep the game moving, but overall they lack the powerful punch that the graphics and soundtrack bring. Still, the slot's medium variance and multiple features can make it an enjoyable game for lovers of Norse themes and recreational players.