Slot Review: Pearl of the Caribbean by Barcrest 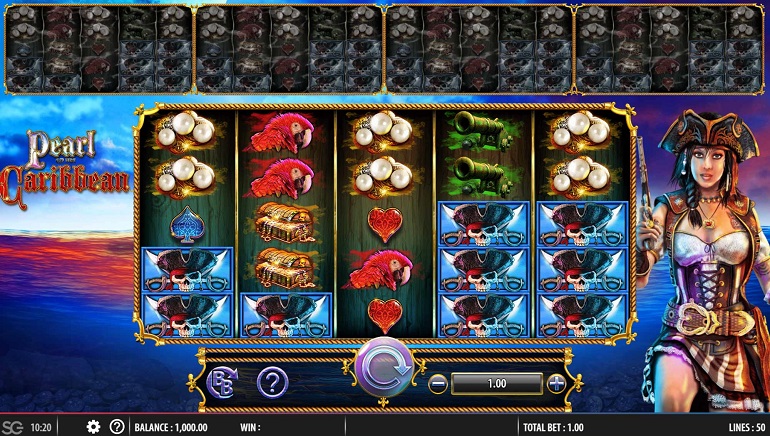 Pearl of the Caribbean from Barcrest is a swashbuckling new slot that features expanding pirate wilds, a Free Spins feature, and a possible win of up to 1250x a player’s stake.

Pearl of the Caribbean is a swashbuckling new slot from Barcrest that is eerily reminiscent of the Pirates of the Caribbean film franchise. The reels are set in sky blue water - to the left is a flag with a skull and to the right is a female pirate who could double as Captain Jack Sparrow’s twin. The gameplay is forward-moving with expanding pirate wilds, a Free Spins feature, and a possible win of up to 1250x a player’s stake.

Pearl of the Caribbean is a 5-reel slot with a varying number of paylines. It's playable from $.10 to $500 per spin on all devices and has an RTP of 96%. Reel symbols include diamonds, clubs, spades, hearts, parrots, cannons, pearls, treasure chests, a pirate ship under the light of the moon, and a skull with a sword in its mouth. The latter is the highest-paying symbol and rewards 25x a player’s stake when 5 land on a payline. There’s also a female pirate symbol that acts as a wild and a gold coin as the scatter. If all 5 reels are filled with wilds, players can win 1250x their stake.

When the female pirate symbol appears fully in view, the Expanding Wild feature is triggered. The symbol expands and activates the top 4 reel sets, creating a total of 250 paylines. The expanding wilds on the bottom will also move up so they will be present on all lines.

When 3 or more gold coins land on the reels, the Free Spins feature is triggered. Players are rewarded 8, 12, or 15 free spins depending on how many scatters land. During this feature, the wilds can expand, and 3 or more scatters can award additional free spins.

It’s not the most original theme out there, but Pearl of the Caribbean certainly hits all the sweet spots of a classic pirate adventure slot. The expanding wilds and free spins make the game interesting, and players of varying-sized bankrolls can enjoy it. Pearl of the Caribbean can be played online and on mobile at Barcrest casinos.