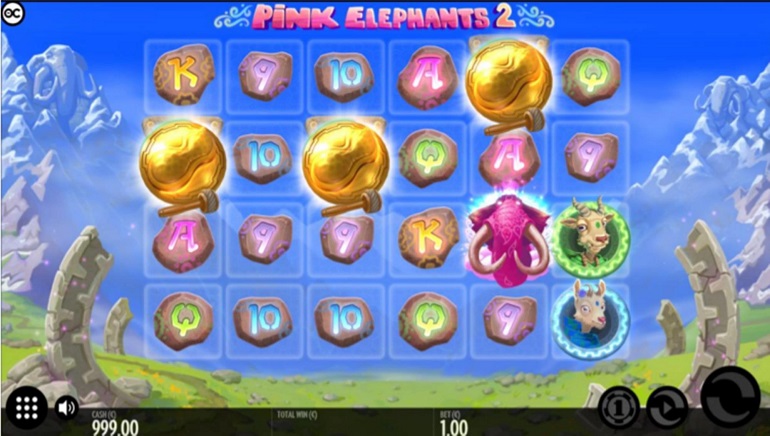 Thunderkick has revamped its original Pink Elephants slot in its new release, Pink Elephants 2. The sequel comes with refreshing visuals, lower volatility, and a higher max win of 10,000x the stake.

Pink Elephants 2 from Thunderkick is the sequel to the developer’s first successful slot of the same name. Only this time, Thunderkick has taken it up a notch with a new setting, upgraded visuals, and a higher maximum win that comes out to 10,000x the stake. This aesthetically-pleasing slot is a fun option for players who enjoy off-the-beaten track themes and high win potential.

Pink Elephants 2 is a 6-reel, 4-row, 4,096 ways-to-win slot that’s set against a backdrop of blue mountains and blue skies. Bets start at $.10 and go up to $100 per spin, while the RTP is a solid 96.13%. This sequel has lower volatility than its predecessor, which may make the game more appealing to a wider range of players.

Symbols include lower-paying 9-A royals and higher-paying goats of different colors and facial expressions. Of course, there is also a pink elephant, which is the highest paying symbol and awards 10x the stake when 6 land on the grid. There is also a W wild and gold peanut scatter. Wins are formed when at least 3 matching symbols line up from left to right (in the case of the pink elephant, only 2 need to line up).

During the base game, a Mystery Scatter Symbol can randomly land on the reels and add between 1 and 5 scatters. This increases the chances of triggering the Bonus Game.

When 3 or more scatters land anywhere in view, the Bonus Game is triggered. Players receive 7, 11, 15, or 19 free spins, depending on how many scatters triggered the game. During this round, elephant orbs can be collected. Each one fills a meter next to the 4 goat symbols, and when a meter is filled, the goat symbol is upgraded to the next one up. When the 4th meter is filled, all goats transform into the pink elephant symbol. Also, every time a meter gets filled, an additional free spin gets added, and landing 2 or more peanut scatters results in additional free spins.

You don’t need to be familiar with the original Pink Elephants slot to enjoy Thunderkick’s new version. It packs enough punch on its own, from the strangely unique theme to the Mystery Scatter Symbols to the Bonus Game. The maximum win in this slot is 10,000x the stake, as good a reason as any to check it out at Thunderkick online casinos.