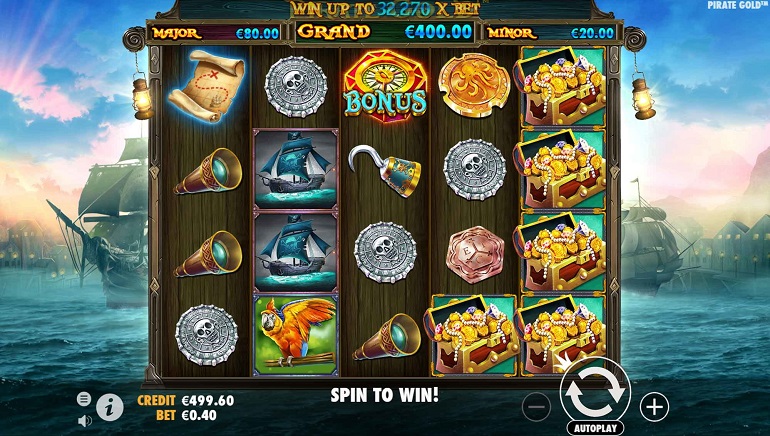 If you want a game packed with excitement, look no further than Pragmatic Play’s swashbuckling progressive slot, Pirate Gold. Set against a stormy backdrop, this slot features free spins, respins, 3 jackpots, and a max win of 32,270x your stake.

If you want a game packed with excitement, look no further than Pragmatic Play’s swashbuckling progressive slot, Pirate Gold. Set against a stormy backdrop, this slot features free spins, respins, 3 jackpots, and a max win of 32,270x your stake. But be warned - it’s highly volatile, which means that wins are few and far between. But when you do get a win - you win big. Are you up for the challenge?

Pirate Gold is a 5x4 video slot with 40 paylines. Bets range from $.40 to $200 per spin and it’s highly volatile - but what else would you expect from a game named Pirate Gold?

Reel symbols include bronze, silver, and gold coins, a hook hand, telescope, treasure map, ship, parrot, a compass scatter, and a treasure chest wild. There are also 2 pirates, which are the highest paying symbols and reward 12.5x your stake when 5 land on a payline.

When 3 scatter symbols land on the reels on the same spin, you’ll be awarded 10 free spins and a payout equal to your total stake. If you land 3 scatters during the free spins round, you’ll get another set of free spins. And what's really impressive is that there’s no limit to how many times this feature can be retriggered.

When 8 or more money bag symbols land on the reels on the same spin, the Lucky Treasure Bag feature is activated. This is a seriously terrific feature. The money bag symbols get locked into place and you get 3 respins, during which the only symbols that appear are blanks, money bags, multipliers, and respins. If you land a money bag, the respins get reset back to 3. If you land a retrigger symbol, you'll get a new Lucky Treasure Bag feature once the current one is finished. Once your respins are finished, the cash amounts on the money bags get added to your booty, along with any multipliers you pick up.

During this round, you can also hit the minor and major jackpots, worth 50x and 200x your stake, respectively. The grand jackpot can be won if you fill all 20 positions with money bags - and then you get 1000x your total stake. The max you can win this round is 32,270x your stake - a treasure worthy of any pirate.

Pragmatic Play’s Pirate Gold is one of the most exciting progressive jackpots we’ve seen in a while - and though it’s highly volatile, the max win of 32,270x your stake may just make it worth your while. But don’t take our word for it - check it out at Pragmatic Play online and mobile casinos and judge for yourself whether the risk is worth the reward.