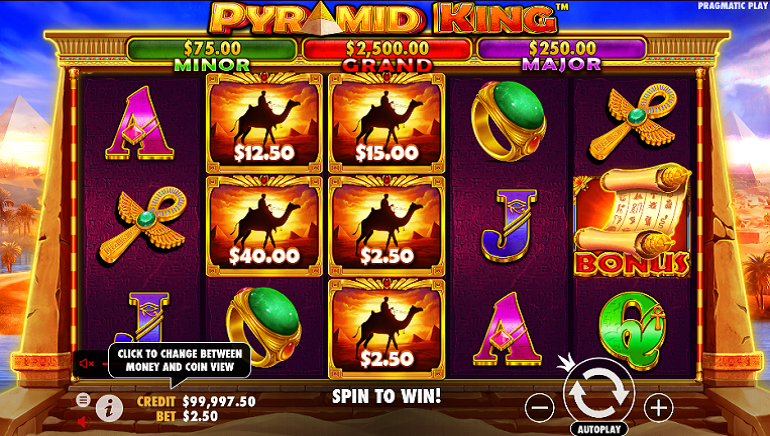 Pyramid King from Pragmatic Play is a new slot with an old theme. Fans of Ancient Egypt will applaud another slot in the same genre, especially since this slot comes with 3 different jackpots, respins, and free spins. Others, however, might be disappointed in Pragmatic Play's lack of creativity. The appealing aspect of this slot is that it has a medium volatility with a max win of 1000x, which can be a nice payout for an endeavor that doesn't require too much risk. Pyramid King can be played at Pragmatic Play online casinos.

The graphics and soundtrack are what you would expect from an Ancient Egypt-themed slot - suitable but nothing out of the ordinary. Lower-paying symbols include J-A royals while higher-paying symbols include Ankhs, snakes, rings, and Anubis. The latter is the highest paying symbol, rewarding 20x the stake for 5 of a kind. There is also a pharaoh wild, which pays out the same as Anubis, a camel money symbol, and a bonus symbol.

Money symbols are assigned cash values or the Minor or Major jackpots. When the respins are over, the total amount of money plus any jackpot is paid out. The Grand jackpot can only be won if the entire grid is filled with 15 money symbols.

When 3 bonus symbols land, they pay 1x the stake and award 10 free spins. Before the free spins start, a random symbol is chosen as the expanding symbol. When this symbol lands it expands to cover the whole reel after the regular symbols have paid out. If players get another 3 bonus symbols, they can win another 10 free spins. The nice touch here is that there is no limit to how many times a player can retrigger the 10 free spins.

Ancient Egypt-themed slots feel almost as old as Ancient Egypt itself. Since the theme has been done so many times, a slot provider that attempts to redo it needs to have a special take on it. Unfortunately, Pragmatic Play does not seem to have managed that with Pyramid King. The graphics and sounds are not very exciting, and though the features are fun, they are rather basic. Perhaps players who are new to slots will enjoy the medium-volatility model and the max win of 1000x. The smaller jackpots and cash prizes may also entice players who aren’t big risk-takers and want to sit back and enjoy a relatively mellow slot.