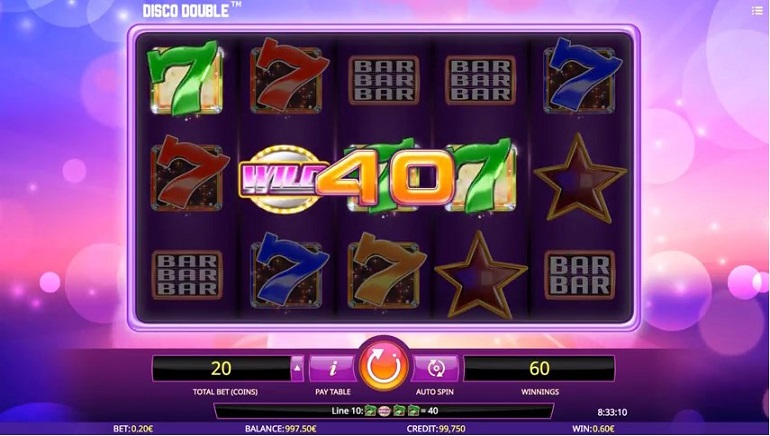 iSoftBet’s Disco Double™ slot is an 80s style extravaganza of song and dance, with disco lights, disco music and plenty of dazzling symbols to light up the reels. Disco Double™ features 5 spinning reels and 20 paylines of interactive entertainment. The beats are reminiscent of the disco era, and players will be moving and grooving while the reels are spinning up a storm.

Disco Double™ features Wild symbols, Disco Double™ Scatter symbols, stars, gold sevens, red sevens, blue sevens, green sevens, and bars. Wilds substitute for other symbols to form winning combinations, except for the scatter symbol. When you land 3+ scatter symbols, 10 free spins will be triggered. All scatter wins will pay according to the pay table. It’s possible to multiply your total winnings by 2 if you land a Mirror Ball on the third spinning reel.

Getting started with Disco Double™ is a breeze. Simply choose your coin value, and all 20 paylines will be activated. To start grooving, click the spin button or use auto-spin functionality to play a pre-set number of spins at set bets. The user interface is bright and cheery, set against an indigo and purple backdrop with disco beats all around. Bets begin as low as £0.01, and go up in the following increments: £0.02, £0.05, £0.10, £0.20, £0.50 and £1.00. All coin values will be multiplied by 20 fixed paylines for your total bet.

Disco Double™ video slot has a jackpot of £10,000, with 1 bonus round. You get to enjoy 10 free spins and up to 2 x multipliers in this great game. The minimum cost per spin is £0.20, and the maximum is £20. The game can be enjoyed on your PC, desktop, Mac, smartphone or tablet, on both iOS and Android devices. To activate the free spins feature, simply land at least 3 Disco Double™ scatter symbols on the reels. When you do so, you can multiply your winnings by x1, x 10 or even x 125 your wager.

Players who fancy a little nostalgia and a lot of fun will love Disco Double™ slot. It’s popping with disco beats, and its been spruced up for the modern age. While the game lacks high-tech animation and interactive elements, it is a tribute to a bygone era. When you’re ready for some razzle-dazzle, put on your dancing shoes and power up Disco Double™ video slot game which can be found at online casinos powered by the software.