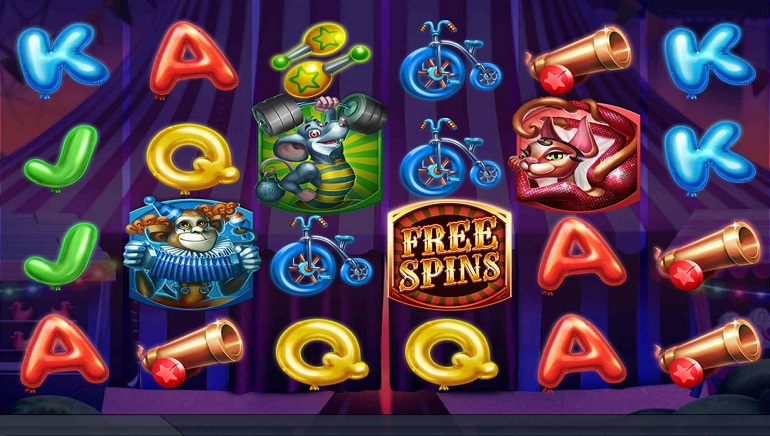 Respin Circus from ELK Studios offers an all-around fun time. It has an upbeat soundtrack, entertaining graphics, and the respins feature keeps the gameplay exciting.

Respin Circus is the latest slot from ELK Studios, and it's packed with - you guessed it - respins, respins, and more respins! Of course, the slot has other redeeming qualities, including its lively setting and entertaining circus characters. There's also a Free Spins feature and a maximum win of 2500x your stake - not the highest payout in the world, but definitely something that beginners and recreational players can enjoy

Reel symbols include lower-paying A, K, Q, and J royals, medium-paying cannons, unicycles, and maracas, and higher-paying animal performers: A cat acrobat, a monkey clown, and a strongman mouse. There’s also a rabbit wild symbol that appears on all reels except 1; it acts as a typical wild but can also boost wins with 2x, 3x, and 4x multipliers. The rabbit can also turn into a fully stacked reel at random.

It's All About the Respins

Whenever you land a winning combination, you get a respin. During the respin, the symbols that contributed to the win will remain stuck in place as the reels spin around them. If another win is created, those symbols also remain stuck and you get another respin. If a different higher-paying symbol appears on a winning payline, the Symbol Upgrade will be activated, transforming all the stuck symbols into the higher-value symbol instead. The feature ends when you get a full screen of symbols or if no more wins are created.

Also during this round, the rabbit wild can randomly pop up with a free spins booster. The max win is 2500x your stake, but as a medium-high variance slot, you can expect to see more frequent wins of about 500x.

Respin Circus from ELK Studios offers an all-around fun time. It has an upbeat soundtrack, entertaining graphics, and the respins feature keeps the gameplay exciting. Since the wins don’t get so high, this is a great slot for players who are just starting out or people who enjoy playing just for fun. Check it out for yourself at ELK Studios online casinos.