Slot Review: Rise of the Mountain King by NextGen Gaming 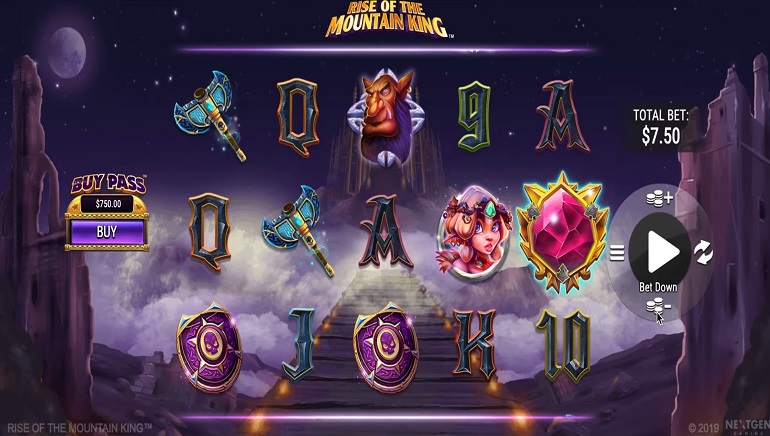 Inspired by Norse mythology, NextGen's Return of the Mountain King treats players to spectacular graphics and an epic soundtrack, along with respins, free spins, and a potential maximum win of 50,000x their stake.

Adventure is the name of the game in NextGen Gaming’s new slot, Rise of the Mountain King. Inspired by Norse mythology and folklore, players will be treated to spectacular graphics and an epic soundtrack, along with respins, free spins, and a potential maximum win of 50,000x the stake. Rise of the Mountain King can be played at NextGen Gaming casinos, online and on mobile.

Reel symbols include lower-paying 9-A royals and higher-paying axes, shields, trolls, and damsels. The latter is the most rewarding standard symbol, paying out 13.3x the stake when 5 land in combination. When 5 wilds land, they pay out about 16.7x the stake, but the real coup is when 5 scatters land, as they pay out a whopping 250x the stake.

During the base game, players can gamble on their wins by guessing the color or suit of a blind card. Guessing right can double or quadruple the wager, but guessing wrong means the win is forfeited.

When 3 or more wilds land on the reels, the King’s Respin feature is triggered. Wins get paid out first, then 1 respin is granted. Any scatters that were on the reels during the triggering spin get turned wild, and all wilds are held in place while the reels spin. If a new wild lands on the respin, it remains in place and the reels spin again. This continues until no more wilds land or all positions have a wild. If all positions get wilds, players win 500x their stake.

Rise of the Multiplier

When 3 or more scatters land on the reels, the Rise of the Multiplier feature is triggered. This is where the real win potential is! Depending on how many scatters land, players win 8, 9, or 10 free spins with respective 5x, 20x, and 250x multipliers. During this round, a meter appears above the reels and the wild starts with a 5x multiplier. Whenever a scatter lands, it goes into the meter and rewards an additional free spin. For every 3 scatters that land, the wild multipliers increase to 10x, 15x, 25x, 50x, and 100x. The multipliers only apply when a wild is used to create a winning combination. The King’s Respins feature can also be triggered during the free spins round.

For players who want to skip the base game and go straight to the bonus round, they can do so by paying 100x the stake. They get the minimum 8 free spins and 5x multiplier of the Rise of the Multiplier round. Another option is for players to pay 50x the stake and spin a wheel made of red and green sections. If it lands on green, Rise of the Multiplier is triggered, but if it lands on red, they lose the 50x and go back to the base game.

Rise of the Mountain King is impressive from start to finish. Graphics, soundtrack, features, and of course, the potential maximum win of 50,000x the stake. For recreational players, the high volatility might be the only drawback, but for serious jackpot-hunters, the volatility is just another way in which the slot shines.