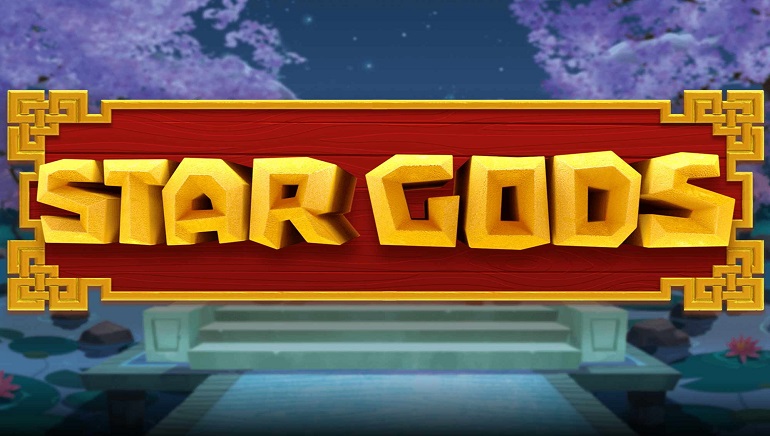 Star Gods from Golden Rock Studio gets points for originality, even if the free spins aren’t as many as players would like. Still, the free spins do offer a guaranteed win, which is reason enough to give this slot a try.

Star Gods is a new slot from Golden Rock Studio and it’s being exclusively offered at Microgaming casinos. The slot has an Asian theme and definitely gets points for originality, even if the free spins aren’t as many as players would like. Still, the free spins do offer a guaranteed win, which is reason enough to give this slot a try.

The reels are placed in a bamboo frame and the soundtrack includes lovely Asian music. Reel symbols include different colored coins, a sealed letter, a fortune cat, and a pagoda, the latter of which awards 30x the stake when 5 land on the reels. There is also a star wild and gold ingot scatter.

In the base game, the star wild can expand to cover the entire reel, and then transforms into a god symbol. It also awards a Win Respin, during which the wild is locked in place. The Win Respin can only yield positive results. If a win is scored on the respin, it’s paid out, and if there’s no win, you spin again until you get a winning combo. If an additional wild lands during a respin, you get another Win Respin.

If a scatter lands at the same time as a wild, the Free Win Spins Bonus is triggered. During this feature, 2 free spins are awarded. This can happen during the base game and during respins. If a new wild lands on a free spin, it gets held in place and adds another free spin. If another scatter lands it awards between 2 and 5 free spins.

If the first two Free Win Spins aren’t retriggered during the bonus round and there is only 1 stacked wild on the reels, players can win two additional spins.

Golden Rock Studio did a nice job at the Asian theme in Star Gods, but the limit of 2 free spins is a bit disappointing. However, because there are guaranteed wins and the option to retrigger the free spins, even experienced slot players may be tempted to try it out. To get a really big win, players will need to bet a higher amount per spin, since the max payout is 600x the stake.