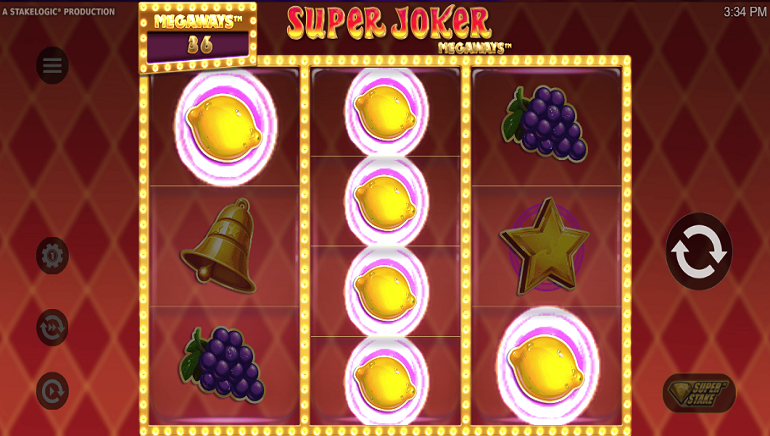 Super Joker Megaways is a 3-reel slot with rows that vary between 2 and 8 on each spin. The maximum number of ways to win is 512. The RTP is fairly high at 96.5% and so is the volatility.

Super Joker Megaways from Stakelogic is a fun twist on the classic fruit machine. The slot stays true to its roots with 3 simple reels but is kicked up a notch with the Megaways mechanic. Then there are the features that will appeal to the risk-takers in the crowd, like Super Stake, which increases the chances of hitting the Super Win feature but costs double the bet. Super Joker Megaways is highly volatile and highly entertaining as well. It can be played at Stakelogic casinos, online and on mobile.

Super Joker Megaways is a 3-reel slot with rows that vary between 2 and 8 on each spin. The maximum number of ways to win is 512. The RTP is fairly high at 96.5% and so is the volatility. Bets range from $.10 to $100 per spin, making this a good choice for all kinds of players.

There are 6 symbols: cherries, lemons, grapes, bells, stars, and lucky 7s. The latter is worth 5x the best when 3 land in combination. There are also scatters in this game, but no wilds.

When 3 or more scatters land at the same time, the Super Win feature is activated. Several prizes appear on the screen and players randomly get 1 of them. Prizes vary between 2x to 600x the stake.

Players who win at least 2x their stake can trigger the Super Joker Mode. When this happens, the background of the game turns blue and the tempo of the music speeds up. Wins can be seen in a Super Meter above the reels. Players can choose between taking a spin, which doubles the size of their total bet and allows the Super Win feature to be triggered with just 2 scatters, or collecting their winnings on the spot. When the money in the Super Meter is less than 2x the stake, the feature ends.

This is a common feature in Stakelogic slots, and at the beginning of the game, players have the choice of activating it or not. When activated, more scatters land on the reels, increasing the chances of triggering the Super Win feature. The cost of activation is double the base bet.

Pairing together a classic fruit slot and the modern Megaways mechanic may seem like an odd move, but Stakelogic pulls it off nicely. The slot remains true to the classic format but adds a little oomph for players who want more. While the winning potential (5184x the stake) isn’t as grand as some of the other Megaways slots, the excitement tends to be higher due to the Super Stake and Super Joker features.