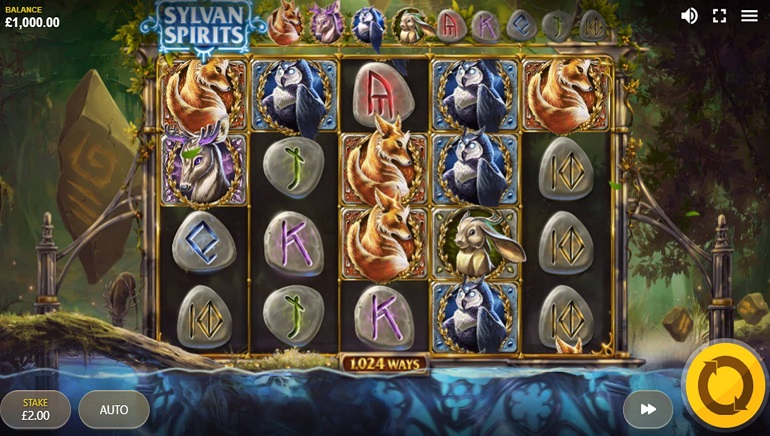 Sylvan Spirits is a 5-reel, 1,024 ways-to-win slot that’s playable on all devices. Bets range from $.10 to $10 per spin and the slot is highly volatile, contrary to the game’s placid theme.

Sylvan Spirits from Red Tiger Gaming looks like a calm, tranquil slot upon first glance, but once players hit the bonus round, there’s plenty of action due to climbing multipliers and cascading symbols. The slot is set in a forest that has an enchanted air about it and the graphics have that same magical aura. Landing the Mega Mystic Wild is the key to unlocking multipliers of up to x99 and in the Free Spins round the maximum win can go up to 7500x the stake. Sylvan Spirits can be played at Red Tiger Gaming online casinos.

Sylvan Spirits is a 5-reel, 1,024 ways-to-win slot that’s playable on all devices. Bets range from $.10 to $10 per spin and the slot is highly volatile, contrary to the game’s placid theme. The RTP is a standard 95.77% like many other Red Tiger slots. Winning combinations are scored when 3 or more matching symbols land from left to right. In the bonus game, winning combinations disappear from the reels and make room for other symbols to cascade down.

Symbols include 10-A royals, rabbits, owls, deer, and foxes. There is also a Mega Mystic Wild that lands as a 2x2 symbol. When it lands, a win is guaranteed and any symbol used in the combination is given a multiplier. The multiplier gets added above the reels, and the next time that symbol is used in a win, the multiplier is applied. In the base game, the multiplier disappears after it’s used. If the second win included another Mega Mystic Wild, players get an extra multiplier that can reach up to x99.

When 3 scatters land on the reels, the Free Spins bonus game is activated. In this round, any winning combination increases the Symbol Win Multiplier, whether a Mega Mystic Wild was involved or not. Also, multipliers don’t reset after a win. Cascading symbols mean that multiple winning combos can be scored on one spin.

As a highly volatile slot, players can go for a while in Sylvan Spirits without scoring any big wins, but once the Free Spins bonus game is triggered, there’s a lot more action. Players who can get through the base game that doesn't offer many frequent wins may end up being rewarded in the end. At the very least, there are pleasant visuals and sounds to accompany players as they journey through the enchanted forest.