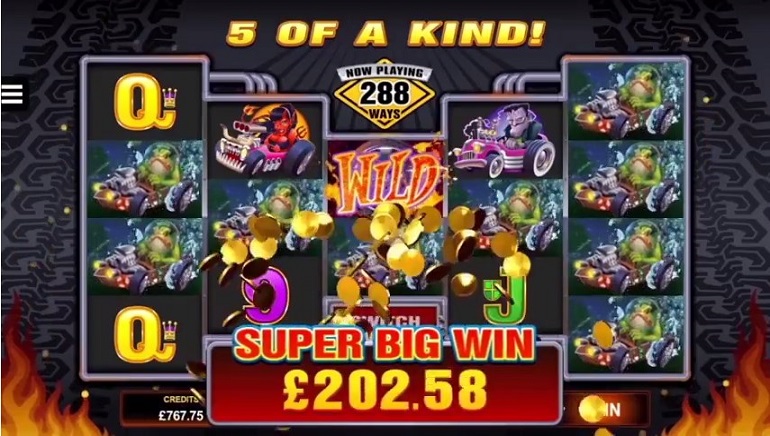 Go for a spooky ride in the Monster Wheels slot that is available now at Microgaming casinos – read the review for details.

Monster Wheels was unveiled in October 2017 as a Halloween release at Microgaming casinos. The overall theme combines horror with motor racing, but the full array of features will be covered throughout this slot review.

The design is quite stripped back, with the most detailed graphics being devoted to the drivers and their cars. Included in the talented roster of spooky monsters are Frankenstein’s Monster, a wicked wolf, a terrifying toad, and a mummified mummy, among others.

In actuality, what stands out most about the design of the Monster Wheels slot is the configuration of the five reels. Most notably, there are four symbols on reels one and five, three symbols on reels two and four, and just two symbols on the centre reel. As a result, Microgaming enables players to win in 288 different ways.

Monster Wheels does not offer adjustable paylines, so there is no way of lowering the wagering value beneath €0.30. Essentially, this gives players a slot where they have to cover 30 paylines while competing for winning in 288 ways. In most instances, Monster Wheels shall permit wagering of up to €15.00

Curiously, there is a button entitled “Switch Ways”. By clicking on this special feature, players will change the structure of the slot. Now, there will be two symbols on reels one and five, four on reels two and four, and just two on the middle reel. Instead, however, there will be just 128 ways of winning from Monster Wheels.

The flaming fuel can is designed as the scatter symbol and can land on reels one, three, and five. Players who can make this happen simultaneously shall have the choice between 12 free spins plus a 2x multiplier, six free spins and a 4x multiplier, or three free spins with an 8x multiplier. Additionally, there is a wild symbol that can land only on reel three.

Monster Wheels is a little basic for the visual design, but there are plenty of features to make the slot interesting. First of all, there is the ability to switch from one reel configuration to another. And, secondly, the free spins and multipliers can be chosen based on the player’s preference.