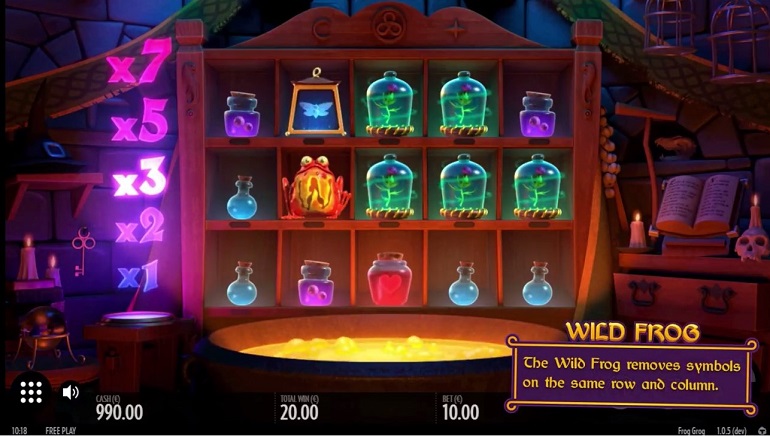 Thunderkick brought out a brand new video slot in October 2016. Frog Grog is a magical slot that is affordable and packed with chances to win.

Frog Grog is a Thunderkick slot released during Q4 of 201, giving players another new game to enjoy. In terms of theme, this is a slot with magical elements, which becomes clear from the glowing cauldron and the colourful potions that are on display in a fantastical workshop.

Thunderkick has made the slot interface in a different way to standard video slots. There are 15 symbols shown on the five reels and three rows, but there is no spinning because the potion bottles appear on a vertical set of shelves.

Instead, the potion bottles drop down and symbols will disappear to be filled by other symbols when they create winning paylines. The advantage of this decision is that players can win multiple times after placing a single stake, while a multiplier can increase through 1x, 2x, 3, 5x, and 7x on consecutive victories.

Frog Grog’s wagering system calls for players to click on the betting value to bring 14 possible amounts that range from €0.10 to €100. This is the only wagering decision that can be made, as this Frog Grog slot has been made with 23 fixed paylines. However, the advantage of the decision is that players only need to stake on 10 paylines to cover all 23 of them.

There is a mystery game that can begin when none of the symbol spaces can be freed after new symbols are dropped in. Aside from the flower, frog, and moth, all other symbols can be removed and winnings will be awarded.

Players will also notice an orange frog symbol, which will burp fire after a payline win. The fire will then remove all symbols on the same reel and row before transforming into a blue frog that will stay in place until the next win.

Frog Grog looks and performs well across desktop and mobile screens, which is a great starting point. The falling symbols, rising multipliers, and affordable paylines will then give players a more rounded slot experience that can be enjoyed on a budget and has winning potential.

The new Frog Grog slot is now live across major Thunderkick sites and can be found at Unibet Casino, Vera and John Casino, and Video Slots Casino.