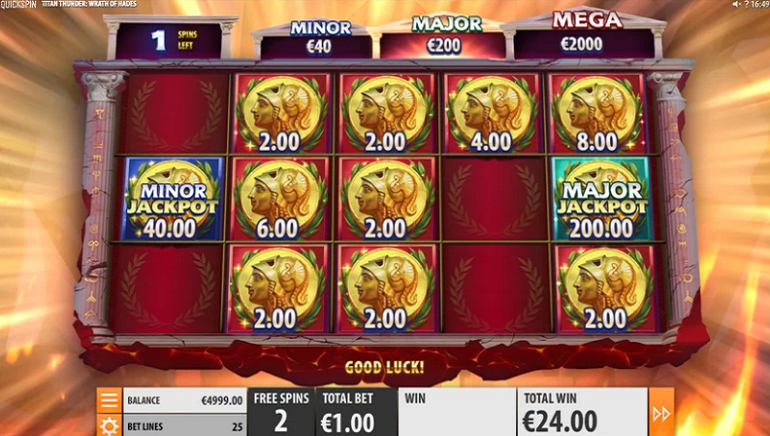 Quickspin' new slot, Titan Thunder: Wrath of Hades, has drama, incredible graphics, fixed jackpots, respins, free spins, and a maximum win of 12,000x or 15,000x the stake, depending on the mode.

The game is set in the sky, the realm of Zeus, and only takes players down to Hades’ domain during Underworld Free Spins. The graphics are grand and the soundtrack is epic.

Symbols include J-A royals, wreaths, chalices, eagles, and temples. The latter is the most rewarding, paying out 20x the stake for 5 of a kind. There are also Zeus wilds, Hades scatters, and money symbols that are instrumental in triggering one of the special features.

Above the reels, there are 3 jackpot values: the Minor jackpot is worth 20x, the Major is worth 100x, and the Mega is worth 1000x the player’s bet. When players land at least 6 money symbols, the Lightning Jackpots round is triggered. Players are awarded 3 spins and the money symbols remain stuck in position as the others spin. Money symbols display prizes ranging between 1x-14x the stake, and then there are the jackpots that can be won. When there are no respins left, or when all positions on the reels are filled, the Mega Jackpot is paid out, in addition to the other wins.

In some locations, the Bonus Buy feature is available. This allows players to purchase entrance into the Underground Free Spins round for 40x the bet. If players choose this route, the RTP rises to 96.55%.

Mythology-themed slots are nothing new, but Quickspin has focused its theme on the rivalry between the 2 brother-gods, Hades and Zeus, to create an all-around enjoyable game. The slot features, including respins, free spins, and fixed jackpots, are enticing and have the potential to dole out big rewards. At the same time, choosing the RTP and the option to buy-in adds another level of player engagement.