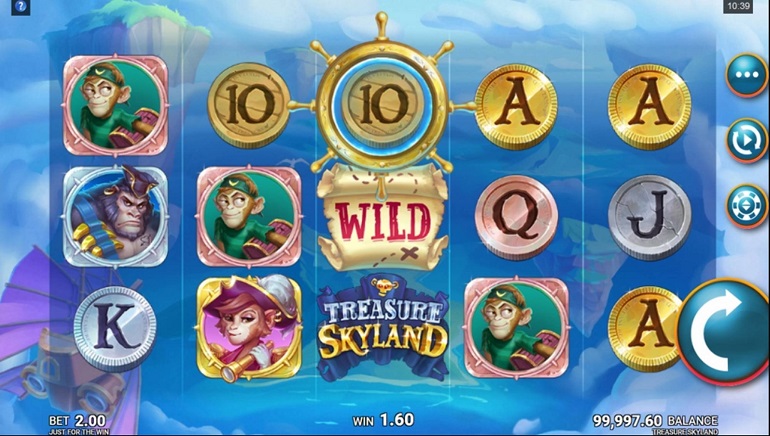 Featuring monkey pirates in the sky, JFTW's Treasure Skyland slot definitely gets points for creativity. The features aren’t bad either  — symbol upgrades, multipliers, wild transformations, and a Pick Bonus feature up are all up for grabs.

Treasure Skyland is the latest slot from Microgaming’s partner studio, Just For The Win. Featuring monkey pirates in the sky, JFTW definitely gets points for creativity. The features aren’t bad either  — symbol upgrades, multipliers, wild transformations, and a Pick Bonus feature up are all up for grabs. While there is no Free Spins feature, there is enough in this slot to make it an appealing option, especially for players who are tired of the typical themes and want something new and fresh.

Treasure Skyland is a 5-reel, 3-row, 20-payline slot that’s playable on all devices. Bets range between $.10 and $100 and the game is highly volatile with an RTP of 96.18%. The high volatility is a departure from JFTW's typical pattern, so it's nice to see the developer trying new things.

The Feature Reel can also trigger the Pick Bonus feature, which shifts the game to a new screen of 15 floating islands. Players start with 5 picks and each pick reveals a cash prize between .5 and 5x the total stake. Picks can also reveal additional picks, which can help players get to the end of the prize map featured on the right of the screen. There are 15 steps on the map, and the last 7 steps reward multipliers of 10x, 20x, 30, 50x, 250, and 1000x of the total stake. The feature ends when all the picks are done.

Treasure Skyland by Just For The Win is a cute little slot with a very creative theme but not much winning potential. At most, the slot will pay 1,000x the stake, or up to $100,000, which can be a bummer for serious treasure seekers. However, the graphics, soundtrack, and Pick Bonus feature are all on point. In fact, it’s a great middle-of-the-way game for players who want a slot with some special features but don’t like being hit over the head with them. Check it out for yourself at Microgaming online casinos.