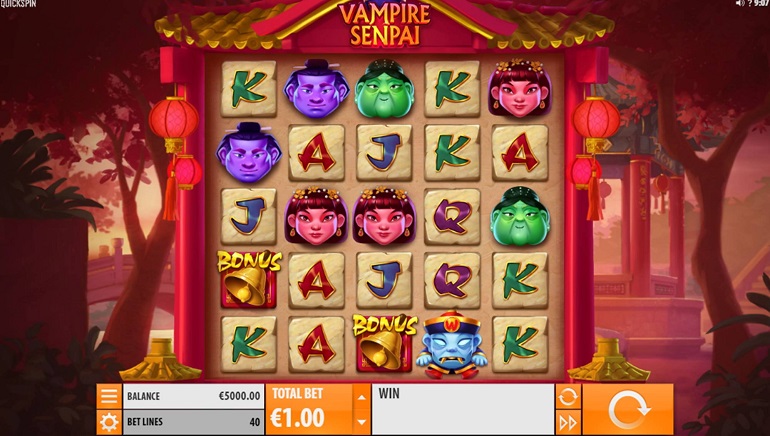 Wilds are the stars of Quickspin's new slot, Vampire Senpai, with 3 different kinds that perform different functions. There is also a Free Spins round in which players can hit the maximum win of 8894x the stake.

Vampire Senpai from Quickspin is a unique combination of two well-known themes: vampires and Asian folklore. The slot is inspired by Jiangshi, undead creatures that appear in Chinese folklore, but the cartoon style used by Quickspin lightens the creepiness. Wilds are the stars of this game, with 3 different kinds that perform different functions. There is also a Free Spins round in which players can hit the maximum win of 8894x the stake. Vampire Senpai can be played at all Quickspin online casinos.

Vampire Senpai is played on a 5x5 grid set against a pagoda with Chinese lanterns swaying gently in a red sunset. Bets range between $.10 and $100 per spin and the volatility ranks 3.5 out of 5 on the scale. The RTP is solid at 96.19%. Wins are scored when 3 or more matching symbols land in succession on 1 or 40 paylines.

When 3 or more scatters land, the Reanimated Free Spins feature is triggered. Players get 7, 9, or 12 free spins, depending on how many scatters landed. When a Vampire Wild lands during this round, it transforms adjacent human symbols (as described above) but it also remains stuck in place for the entire feature.

Also during the free spins, between 3 and 9 Talisman Wilds can appear. These too remain stuck in place until the round is over. For every Vampire or Talisman wild that lands, players get an additional free spin.

Vampire Senpai is not your typical Asian-themed slot, and Quickspin definitely gets points for creativity. The execution of the theme is also done well, with cute graphics and funny animations that rope players in despite the eerie folklore. With multiple wilds, a Free Spins feature, and a maximum win of 8894x the stake, players might find themselves thirsty for as much Vampire Senpai as they can get.