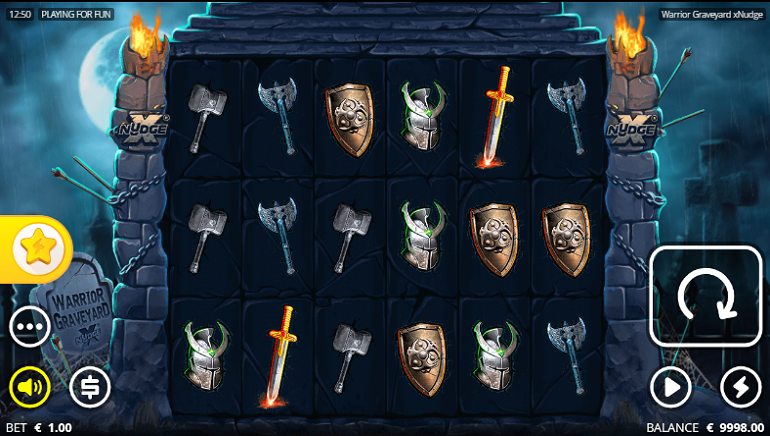 Warrior Graveyard from Nolimit City is a spooky slot with spectacular features, including xNudge wilds, a Warrior Attack feature, 2 Free Spins rounds, and a maximum win of 9797x the stake.

Warrior Graveyard from Nolimity City is the unofficial follow-up to the developer’s wildly popular slot, Barbarian Fury. While the 2 games don’t need to be played together, they are very similar in terms of features and gloom, though this one includes an upgraded math model. Warrior Graveyard is the aftermath of the bloody battle of Barbarian Fury. Its graphics are intense and the soundtrack epic. This is not a slot for the faint of heart, though those who dare will enjoy xNudge wilds, a Warrior Attack feature, 2 Free Spins rounds, and a maximum win of 9797x the stake.

Warrior Graveyard is a 6-reel, 25-payline slot that’s playable on all devices. Bets range from $.25 to $100 per spin and the default RTP is 96.16%. (THough beware, some operators can lower it.) The setting is appropriately morose, with the grid set among tombstones, fires blazing, and a full moon in the background.

There are 5 low-paying symbols, including a hammer, axe, helm, shield, and sword. The skeletons are the higher-paying symbols, and they come with different-colored battle gear. The wilds are called xNudge Tombstone Wilds, and they cover 3 positions on the reels. When they land partially in view, they are nudged to cover the whole reel. Each nudge increases their multiplier by 1x. The multiplier can get as high as 12x when multiple wilds land.

When 3 of the higher-paying symbols land fully or partially in view, the Warrior Attack feature is triggered. If the feature is triggered from partial symbols, they get nudged into view and their multiplier increases by 1x with each nudge (like with the Tombstone Wilds). If the 3 symbols land totally in view, they are slammed to the left of the grid. Tombstone Wilds are also in play during this feature.

There are 2 Free Spins features in this game. Graveyard Spins is triggered when 3 or more scatters land on the reels, and players can win between 8 and 12 free spins. For every Tombstone Wild nudge, the win multiplier increases by 1x. There are also Death Spins, which are triggered when 6 scatters land in view. Players receive 14 free spins and a win multiplier that starts at 1x. It increases with every Tombstone Wild, but in this round, the wilds remain locked in position on the reels for all the free spins. Additional scatters that land can reward an extra free spin but the round can't be retriggered.

Warrior Graveyard is a somber slot with spectacular features. Players who like kittens and cuddles will shy away from this one, but those who revel in darker adventures will love the versatile features and the high maximum win of 9797x the stake. Players can play both Warrior Graveyard and Barbarian Fury at Nolimit City online casinos and see which one is their favorite.