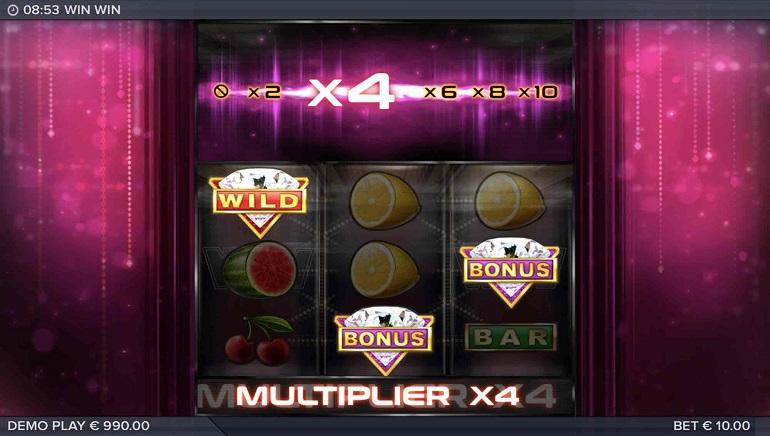 Win Win is a new slot from ELK Studios, and like many of the developer's popular slots, it features a classic theme with a sleek, modern twist. Its bonus game is especially interesting, with a multiplier that changes with every spin.

Win Win is a new slot from ELK Studios, and like many of the developer's popular slots, it features a classic theme with a sleek, modern twist. On the surface, it looks like a typical 3x3 slot, but as the game unfolds you'll discover Locked Reels Respins, Win symbols, potentially infinite free spins, and the opportunity to win up to 5000x your stake. Check it out at ELK online casinos.

Win Win has 3 reels and 17 connecting paylines. Bets range from $.20 to $100 per spin and it's playable across all devices. Reel symbols include single bars, double bars, triple bars, classic cherries, watermelons, and lemons, and different-colored 7s. There is also a special Win symbol and a diamond wild. The triple 7s will award you 15x your stake when 3 land on a payline, while the diamond wild will award 50x your stake when 3 land in combination.

When the same symbols appear on reels 1 and 3, the Locked Reel Respins will be triggered. You get 3 respins while reels 1 and 3 remain locked and the middle one spins.

When 3 bonus symbols land, the Free Spins Bonus Game will be triggered. Each win in this round makes the multiplier grow up to 10x. But here's the kicker - a non-win will lower the multiplier, and when it gets as low as 2x, the round is over. The good news is that the bonus symbol becomes wild in this round. The really good news is that you can trigger the Locked Reels Respins and Win symbols during the Bonus Game, the latter of which can reward you with up to 5000x in one spin.

ELK Studios has a record of producing high-quality, intriguing slots, and Win Win continues the streak. With respins, Win symbols, and a bonus game that has the potential to award 5000x your stake, it's an all-around entertainment.