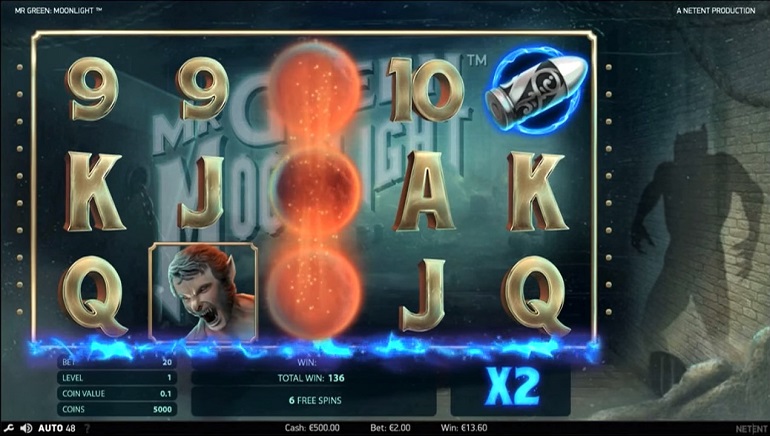 A look at the unique exclusive slot from NetEnt and Mr Green Casino.

The very popular Mr Green Casino and the ingenious software developer Net Entertainment have teamed up once again to create a special slot machine. Called Mr Green: Moonlight, the game has been exclusively created for the online casino and features the famous mascot dressed in green in a mysterious theme.

Mr Green: Moonlight is set in the 1860s and the main protagonist is Mr Green himself, who is now a werewolf hunter after his wife was killed by such a creature. He can be seen alongside the five reels, looking over the town at night, with his gun in hand.

The attention to detail for the creepy background and the symbols on the screen make the game very entertaining and this of course was to be expected from NetEnt.

It wouldn’t be a great modern slot without some special features and the slot machine lives up to expectations with Linked Wilds, Free Spins and win multipliers.

Linked Wilds are shown as the moon, which can be blue during the base game and red during the free spins. These can appear on reels 2, 3 and 4 and one has the power to turn two or more nearby symbols into additional wild symbols.

The game is played on five reels with three rows of symbols and 20 fixed lines which pay from left to right. The coin value can range between 0.01 and 0.50, while the level can go up to 10 and determines the number of coins used on each spin. The symbol showing Mr Green is the highest paying one in the game, followed by the werewolf.