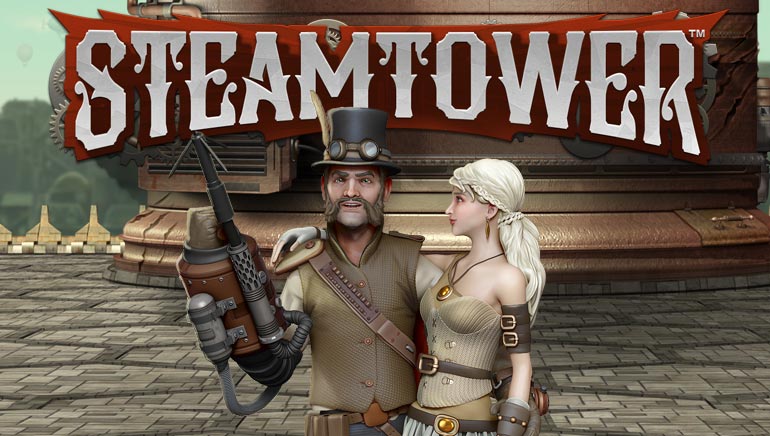 Steam Tower is a steampunk video slot with an innovative tower-climbing feature. Find out all you need to know before playing.

Steam Tower is the latest title to feature in OCR’s Slot Spotlight series. Fundamentally, this will appeal to any gamers who have affection for innovative features or steampunk culture – or both. Steam Tower has been an important slot for driving forward video slot development.

NetEnt is the developer behind Steam Tower and is best-known for creating highly familiar titles such as Starburst, Gonzo’s Quest, Dracula, and Guns N’ Roses. This proven pedigree has served NetEnt well in creating Steam Tower, which is available at 777 Casino, Casino Cruise, and Video Slots Casino.

For reference, the term steampunk is used to describe an alternate history within science fiction where the world became more technically advanced during the 19th century. To depict steampunk, there has to be intricate use of steam-powered gadgets and machinery.

When viewing the screen, players will notice a gaming interface comprised of five reels and three rows. Look behind the reels, however, and players can see the industrial tower that features in the name of the title. At the side, there is also a 19th century gentleman with a harpoon contraption.

To set the value of a stake, players need to choose a betting value within the range of one to 10. Before spinning, they next have to assign a coin value of between €0.01 and €1 for the 15 fixed paylines. This allows for a minimum €0.15 bet per spin and a maximum of €150.

The innovation at the core of the slot is a feature that allows for players to climb the Steam Tower to save a beautiful woman from a dragon. There are 16 floors in total, with players climbing one at a time for each wild symbol that appears during free spins.

During this feature, players have a tower meter to show their current multiplier. The gallant souls who make it to the top will win 1,000 coins.