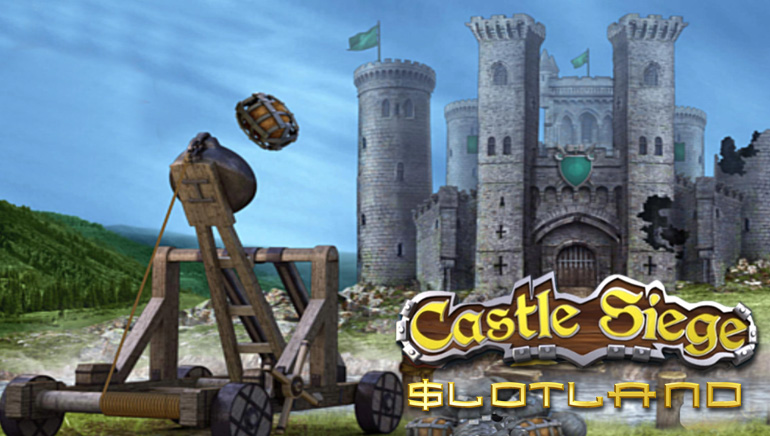 Slotland has released a captivating new slot game known as Castle Siege. This adrenaline-loaded game brings chivalry and generous rewards to your screen in a blistering new adventure.

Castle Siege is the latest creation from Slotland. This popular online casino uses proprietary gaming technology to create all of its casino games. Castle Siege is peppered with authentic elements such as jewel encrusted crowns, armour, majestic calligraphy, and a sprawling moat around the castle. Players are tasked with competing for the ultimate glory – a joust with master swordsmen and royal guards. This game encapsulates the essence of the Middle Ages, with an intricately detailed milieu and pulse-pounding action.

Players are required to form winning combinations in this entertaining slot game. There are 5 spinning reels and 30 paylines. Bets begin at $0.02 and rise to $37.50 per spin. Casual players and high rollers alike can enjoy the action-packed adventures in this feature-rich slot game. The pay table lists all possible symbols in the game. These include Ace, Jack, Queen, and King as the low-paying symbols. The high-paying symbols include the Knight’s helmet, the silver chalice, the orb, and the King’s Crown.

It’s the Wild, Sticky Wild and Bonus Games that ramp up the excitement in Castle Siege slot game. The Wild symbol substitutes for other symbols, except for Scatter symbol and Bonus Symbols to form winning combinations , and it is represented by the wooden shield. The Sticky Wild is activated during the free spins round. It stays in place and duplicates itself in neighboring positions on the reels. The bonus game is activated when 3+ Bonus Scatter symbols form on the reels at the same time. With the Catapult Bonus Game, players must destroy the castle, one wall at a time, with the ammunition provided to them.

If you happen to hit the gunpowder storage facility, the castle will explode, and the siege is over. This game is laden with golden treasures, and players must venture beyond the moat and the walls of the castle to reach the jackpots. The Catapult Bonus Game initiates one of 3 jackpots in the game. Players will be asked to select their weapon and then fire it up. There are mini jackpots, major jackpots, and grand jackpots. You can activate higher jackpots by placing bigger wagers.

Break the Castle Siege and Win

The authenticity of the game is evident throughout your gaming sessions. For example, when there are royal occasions, the King's guard will sound the trumpets and you’ll see red and blue flags displayed on the castle walls. The King has thrown down the gauntlet: Break the Castle Siege and claim the spoils of victory.