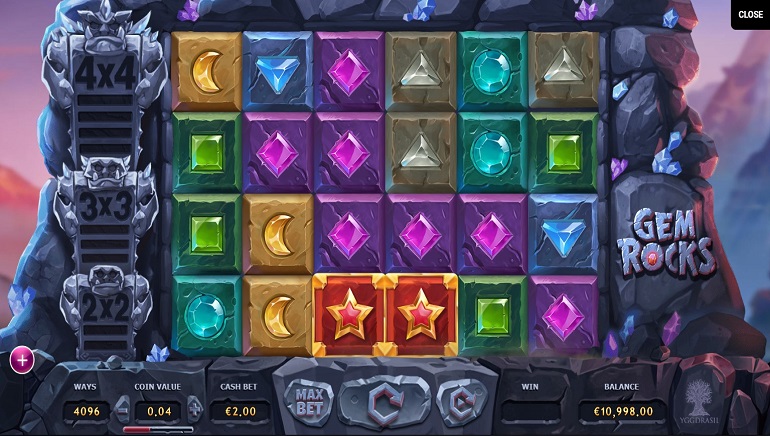 Yggdrasil has a new slot game called Gem Rocks that lets players mine for winnings by breaking up the on-screen blocks.

For 2018, Yggdrasil Gaming has released a brand new game that combines slot and block-breaking elements. This is a video slot that sees Yggdrasil focus on creating a gaming experience with innovative features rather than story elements. The Gem Rocks slot is available now on desktop and mobile at participating Yggdrasil online casinos.

Yggdrasil has designed a rocky mountainside as the backdrop for the slot. The main interface then show a colourful array of block symbols, with each bearing a colourful gem. The slot interface is much larger than the average game, as Gem Rock has been made with six reels and four rows to allow for 24 blocks to appear.

The wagering allows for player to assign a minimum €0.02 coin value, which equates to a €0.10 cash bet. There are plenty of other coin values to pick from, with the €1.00 maximum representing a €50.00 cash bet. A range of auto-spin values is then available in case players wish to take a break for a number of spins.

The design of the slot allows for winning symbols to be matched from left to right in adjacent symbols. The greater the number of symbols on a reel will result in a larger multiplier being activated. Altogether, Yggdrasil has revealed that there are 4,096 possible ways of winning in Gem Rocks.

In a session of Gem Rocks, it is possible for player to win up to 9,000 times their wager. This is due to Gem Rocks using a block-breaking design. Basically, a winning combination of symbols will result in them being exploded and removed from the screen. Replacement symbols will then automatically fall into their place for potential extra winnings.

After consecutive wins, the slot can then offer the Gem Rock feature. This starts with two wins delivering a 2x2 Monster Rock. A 3x3 rock then appears after five straight wins, while a massive 4x4 rock lands following nine wins in a row. The slot shall track such progress by displaying the currently activated rocks using a gauge on the left side of the screen.