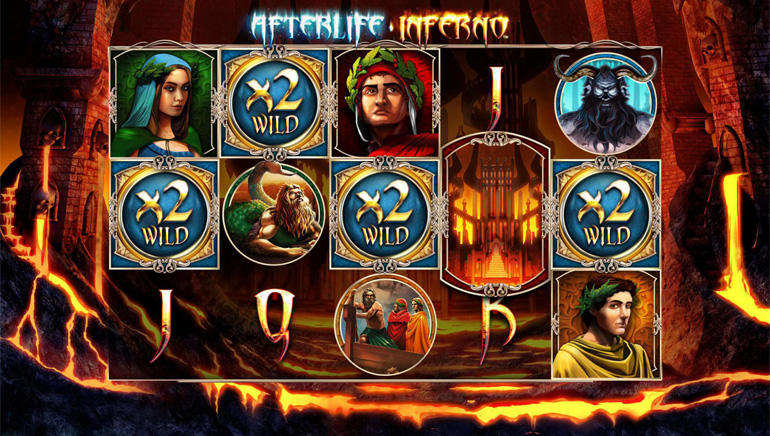 Join Dante on his journey through the underworld and discover many exciting features along the way in this visually impressive game by Leander.

Although we've seen many slots inspired by myths, legends, and fairy tales, it isn't often that we see a game that draws its inspiration from classical literature. Leander Games decided to change this, announcing their Afterlife Inferno slot, based on the most popular part of Dante Alighieri's three-part 14th century epic Divine Comedy.

Alighieri's masterpiece, which inspired the game, brings to life the writer's vision of afterlife, influenced by Christian beliefs about the Paradise, the Purgatory, and, of course, the Inferno. Leander Games' designers tried to translate this vision into a modern-day gaming experience and they did a great job of it.

The game welcomes you with transparent reels set against the classic depiction of hell, filled with burning fires and molten lava, creating an ominous atmosphere further boosted by the game's tense and chilling background music.

Reels are populated by symbols relevant to the epic, including Dante himself, the love of his life Beatrice, Virgil, his guide through the underworld, as well as several depictions of scenes described in the Inferno, all designed in the style of oil paintings for greater authenticity.

Get to Know Dante's World

The Afterlife Inferno slot comes with 20 paylines set on the standard 5x3 grid but equipped with several bonus features to make this game packed with action. First of all, there is the wild symbol, represented by the game's logo, which doubles all the winning combinations it helps form.

Then, there is the scatter depicted by the infamous gates of hell. Landing three of these on the reels triggers one of three bonus features and players can choose between the Inferno, the Purgatory, and the Paradise feature.

On top of all this, there is the randomly triggered "Hell Freezes Over" feature, which can add up to five wild reels.

Afterlife Inferno by Leander Games certainly promises a lot. With truly great graphics, a really interesting theme, and a number of bonus features to keep the game going, it is definitely one of the titles to look forward to. You can find this one at online casinos powered by Leander Games this month.