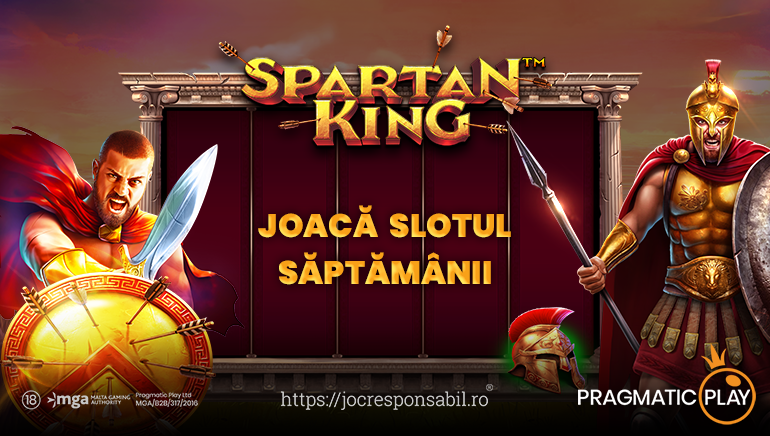 Pragmatic Play has continued to bolster its army of video slots by releasing Spartan King as a brand-new entry with free spins and high volatility.

Without the release of the 300 movie in 2006, the world might never have borne witness the creation of video slots like Spartan King. Developed by Pragmatic Play, the brand-new Spartan King slot has received a widespread release at participating Pragmatic Play casinos as of 3 December 2020.

Rated as highly volatile, Spartan King is a slot that has been inspired by history and ancient warfare. Compatible on smartphones, tablets, and laptops, this slot has been built using an interface that consists of five reels and four rows. This ensures that there is an extra row of symbols when compared to the majority of video slots that are available on the iGaming marketplace.

The plus and minus buttons on the screen can enable users to assign their preferred wagering value. Developed with 40 fixed paylines, Spartan King can allow for one to 10 coins to be staked on each payline, while the coin value can range from €0.01 up to €0.50. Therefore, the starting point of the total bet can be €0.20 and the highest can be €100.00.

From the paytable, it is apparent that Spartan King can trigger a multiplier of up to 7,480x. As for the special features, Spartan King can provide wild symbols on the second, third, fourth, and fifth reels. They are intended to substitute for every other symbol, though not the bonus scatter symbols.

In Spartan King, the introduction screen explains that a 25x multiplier can be triggered during free spins. To reach that point, the reels need to be spun until the bonus scatter symbol has landed simultaneously on all five of the reels. Players can trigger the highest multiplier of 25x by using 2x2 wild symbols to contribute towards the total winnings that have been calculated.