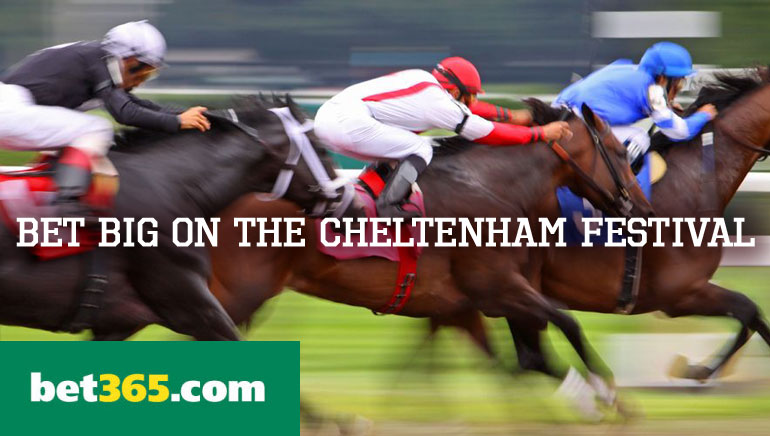 This year's Cheltenham Festival kicks off today and the stakes are bigger than ever for Jockey's and punters alike.

Today begins the 2017 Cheltenham Festival and this years event will be the biggest in its 157 year history. There is £4,305,000 in prize money up for grabs, second only to the famed Grand National. From today until the 17th, an average of 62,000 fans will be at  Cheltenham Racecourse in Cheltenham, Gloucestershire for this super event featuring 28 world class races and hundreds of betting markets at bet365 Sports.

The Cheltenham features some of the best Grade 1 races of the year including the Cheltenham Hurdle, Cheltenham Gold Cup, Queen Mother Champion Chase, and the World Hurdle. Over the course of the festivities, hundreds of millions of pounds will be bet on the races both online and in person at the event and with one of the aforementioned Grade 1 races on each of the four days, let's take a look at the best bets and ways to extend your bankroll so you don't miss out on the action.

Opening day today begins at 10:30 GMT as the gates to the beautiful grounds open up. A funny fact, over 12,000 cups of tea will be served each day, but let's get back to the races. They begin at 13:30 GMT just after the famous 'Cheltenham roar deafens the crowds, but the main event for day number one is the Stan James Champion Hurdle, which was won last year by the powerful mare 'Annie Power'. This premier race will be over in about 3:45:10 seconds, but there will be millions wagered on this race alone. The favorite going into the big race is Yanworth at 3.50, followed by Buveur D’Air at 5.50, Brainpower at 8.00 and Petit Mouchoir at 8.50. The odds look fantastic for all of the underdogs and we have seen crazy things happen at Cheltenham in the past.

The second day of the festival is one of high fashion, high society and the Queen Mother Champion Chase. We could witness a rare hat-trick in this race,as the outright favorite Douvan is unbeaten in his last 13 starts and is a perfect nine for nine over the fences. After winning the Supreme Novices Hurdle and the Arkle Event respectively, Dougan is poised to bring his owner his first win in the race. Dougan is listed at 1.25, not leaving much room for profits for bettors, but if an underdog were to win this race, we are talking about odds from 8.00 all the way up to 67.00.

One of the best days to be at Cheltenham, as St. Patty's day is a wild one, with the Sun Bets Stayer’s Hurdle taking center stage; that is after the Guinness. Yes the beers will be flowing, as will the bets as this incredible race has some very interesting odds. The markets are a big tighter in this race as five horses are between 4.50 and 6.00 at bet365 Sports. Shaneshill (4.50), Vroum Vroum Mag (4.50), Jezki (5.00) and Yanworth (6.00) should make up for some very exciting bets coming down to the wire on the racetrack.

The biggest race on the jump racing calendar, the Gold Cup takes center stage tonight, but only after big races like the JCB Triumph Hurdle, the County Handicap Hurdle but all eyes will be on the fourth race of the day, and one of the very last chances to bet on this caliber of jump racing for the next year. Cue Card and Native River are both listed at 4.33 just to show you how tight this race really is. Djakadam (4.50), Outlander and Sizing John (both at 11.00) and More of That and Empire of Dirt could easily pull off the upset win, which would surely be a great win to take home.

The festival takes a special place at bet365 and the sportsbook has created a few unique deals that could be the difference between a bit of money and a lot of money in the long run. If you plan to watch the races today on ITV, then take advantage of the 'Price Promise' offer in which bet365 guarantees the best price amongst all of the biggest and best sportsbooks in the world giving an extra edge on each bet. The same is to be said about the odds, as bet365's 'Best Odds Guarantee' is does just that and promises to payout at the highest SP accordingly on the main betting markets.

As always, be mindful of the Terms & Conditions before opting in to wager.