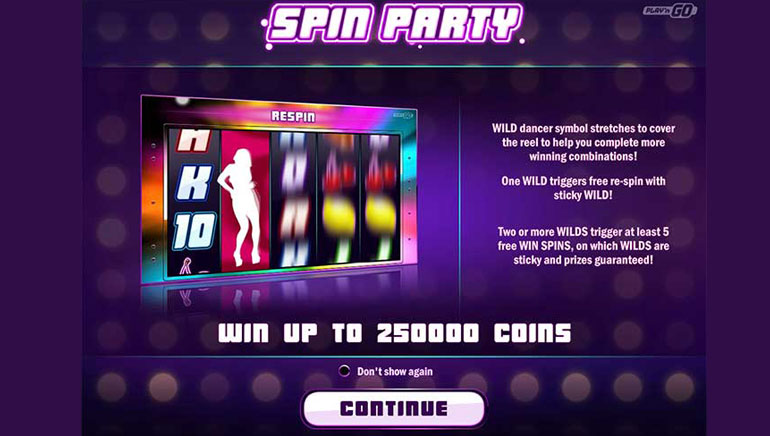 Spin Party is a special dancing slot scheduled for release by Play’n GO on desktop and mobile on 6 August.

Play’n GO is unveiling a dance-themed video slot that is introducing a brand new slot next month that is aiming to get tempos racing this summer. Spin Party is slated for a simultaneous release on 6 August across mobile and desktop mobile devices and is coming to leading Play’n GO casinos, including Casino Cruise, Tivoli Casino, and Vera&John Casino.

Spin Party is filled with bright party vibes, created by combining purple visuals with retro slot symbols. A five-reel slot interface has been positioned at the centre of the slot, with special features then added to complement the core game. Meanwhile, the integration of 10 fixed paylines over the reels is to ensure that the slot is accessible on mobile devices.

A dazzling stylistic choice has been to use glamorous dancing girls to appear as the expanding wild symbols. Those symbols can potentially land on reels two, three, and four. In such instances, an expanding wild will explode in size to occupy the entire reel. The wild symbol can then fill in for any symbols that are currently missing on a payline, making it even simple to win.

An added perk is that the wild symbol will remain in place while you are treated to a re-spin. There are yet more spins to unlock. Land two or more wild symbols during play and there will be five free spins to savour. Every one of those free spins will also come with a guaranteed prize, further adding to the spectacle that is Spin Party. Wild symbols will remain in place for WIN SPINS, and it is possible to create a sequence of 20 WIN SPINS.

Where to Play Spin Party

To recap, you will be able to play Spin Party on desktop and mobile devices from 6 August 2015. Find the slot game soon at Casino Cruise, Tivoli Casino, and Vera&John Casino.

No Tournament Fees at Party Poker