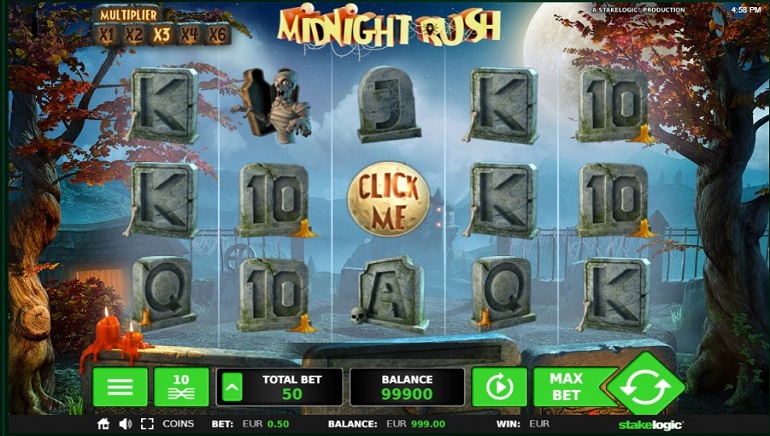 StakeLogic may not be one of the biggest names in the casino game suppliers' industry, but they are quickly becoming known for their spooky games designed to create a suspenseful and tense atmosphere, bound to appeal to the fans of the horror genre. Their latest two titles, Lord of Darkness and Midnight Rush, follow this pattern, as they feature dark, mysterious surroundings, creating a gaming experience you won't easily forget.

Set on the backdrop of what appears to be an old cemetery or an abandoned mansions, the Lord of Darkness slot sets up the atmosphere before you even make your first spin. Spooky music and scary screams and roars, coupled with the sound of wind upsetting the night silence, will set the tone even more, and this is all before you even start playing properly.

Once you get in the mix, this 25-paylines game will really do its best to send chills down your spine all the way throughout. With symbols like skulls, vampires, werewolves, coffins, and bloody wilds, Lord of Darkness isn't for the ones who get scared easily. Animations accompanying winning spins, with scary transformations accompanied by howls and screams, make this one of the most chilling slots out there.

If you get past the scary part, however, Lord of Darkness does offer some interesting gameplay features with a decent winning potential. First of all, there is the Random Wild feature, which can randomly turn the Guy or the Girl (or both) symbols into additional wilds. When this happens, they'll be transformed into a Werewolf and a Vampire, respectively, creating a lot of potential for winning combinations.

The free spins bonus game is initiated by three or more Scatters (a Burning Coffin symbol) landing anywhere on the reels. You can win anywhere between 8 and 25 free spins, depending on the number of scatters and how lucky you get when picking the bonus symbol. During the bonus round, the Lord of Darkness symbol is stacked on the reels, and it functions as another wild, creating a huge winning potential in the bonus round.

Designed in a similar fashion, Midnight Rush is another StakeLogic game that takes players into the world of horror, fear, and dread. The background is, once again, a graveyard covered in mist, with large moon lurking in the background.

Low-value symbols are engraved into tombstones, giving this game a particularly chilly feel. Other symbols you'll encounter include vampires, demons, mummies, and whatever else you'd imagine lurking in the shadows of a stormy night. Music playing in the background is suspenseful, interrupted by sounds of thunder and howling of the wolves in the distance, creating a fully-rounded horror-like atmosphere.

Of course, the game isn't just about making it difficult to fall asleep afterwards. Midnight Rush features only 10 paylines, but they pay from left to right and right to left, so there is definitely a potential for big hits there.

In terms of features, first of all, there are the Expanded Wild Symbols. When the stack of three Wilds lands anywhere on the reels, it will expand to cover random positions on reels 1, 2, and 3, which can pay handsomely if Lady Luck looks your way.

The Click Me bonus game is initiated by landing three or more "Click Me" bonus symbols anywhere on the reels. You'll get to keep clicking on the symbols, picking up cash rewards, until you uncover the symbol with the word "Collect," ending the bonus round.

Finally, there is the Random Multiplier feature, which is triggered at the start of every spin. Ranging from 1x to 6x, the feature will multiply all the wins from that round with the applicable multiplier, so you never know when the big hit might land in Midnight Rush.

If you feel ready and would like to see what StakeLogic is all about, you can try both of these new games at StakeLogic-powered casinos like Omni Slots Casino.