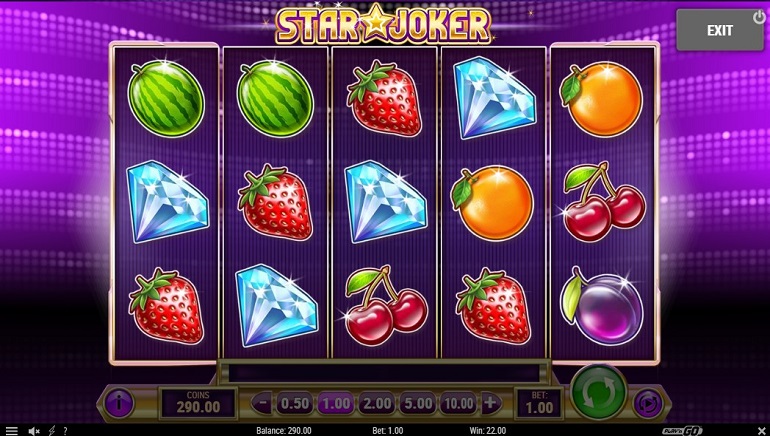 Star Joker is a new December slot from Play’n GO that can provide players with wilds, free spins, and the chance to win a 5,000x jackpot.

December 2018 marks the release of the new Star Joker slot, which represents a combination of designs and features readily associated with old school slot machines. Star Joker is now live at participating at Play’n GO casinos and is playable on an array of compatible desktop and mobile devices, including Windows, Android, and Apple.

Star Joker is slot made with five reels and three rows of symbols that are based on traditional slot machines. The array of cherries, plums, watermelons, strawberries, diamonds, bells, and 7s have been optimised with a glossy style for modern screens and can be matched along the 10 fixed paylines that have been integrated.

The paylines have been designed to allow for players to win with two or more symbols rather than at least three, like in most five-reel slot games online. From the paytable, players can see that the lucky 7s are the most valuable symbols in the base game, paying out a 100x multiplier when five appear on a single payline.

When starting Star Joker, players have the option to participate in a tutorial explaining how the slot works. In terms of wagering, players can select their preferred value by using the horizontal options presented below – plus and minus are used to reach the lowest and highest values.

Play’n GO uses the star image as the wild symbol that can substitute for nearly every other except for the scatters. In addition to being a substitute symbol, the wild symbol can pay out up to 500x times the stake when five are combined on a payline.

The next special feature is driven by the joker scatter symbols. If three jokers are landed simultaneously on reels one, three, and five, then players will gain 10 free spins. During this feature, a special wild joker will appear that can substitute for every other symbol and the maximum jackpot is 5,000x.