Step Inside Dracula's Castle with New Slot by Wazdan 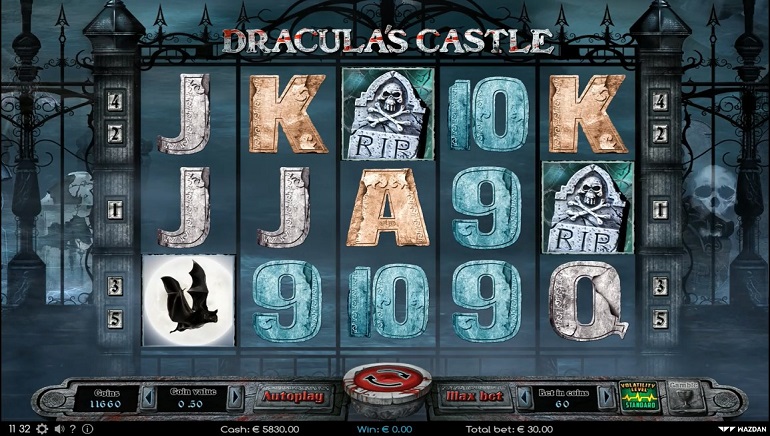 The new Dracula's Castle slot features just five paylines and a single expanding wilds feature but it is still an entertaining and exciting game well worth a few spins.

Wazdan, a casino game developer still trying to make a name in the market has made a step in the right direction with their latest Dracula's Castle slot. The game features the vampire theme that never goes out of style and brings out some very solid artistic work and fast-paced gameplay, guaranteeing a lot of excitement.

Wazdan decided to keep things simple with their latest release, so Dracula's Castle comes with just five paylines across five reels, which is something we rarely see these days, when slot developers seem to be competing to add more winning ways and create a bigger winning potential.

However, the company makes it work even with just five paylines, because the game features rather impressive graphics, with reels set on the backdrop of Dracula's Castle and symbols appearing on the reels representing Dracula himself (wild), a couple of female vampires, tombstones, and unavoidable bats.

One Feature with a Lot of Potential

Dracula's Castle comes with a single main feature, but this feature harnesses a serious potential for relatively frequent big wins. Namely, wild Dracula symbols will expand to fill the reel when creating winning combinations, which can pay decently even with just five paylines.

The full line of wilds or the highest paying symbol pays 5,000 coins or 50 times the total bet, so the biggest win on a single spin is 250x the bet. This isn't the biggest jackpot you can get on slots by far, but it should also be much easier to land, giving this game very decent playability.

Additionally, stacks of lower paying symbols from 9 through Q will multiply their wins by up to 5x, depending on the number of reels, and this includes expanding wilds. This feature offsets the fact these symbols regularly pay quite low.

All in all, the Dracula's Castle slot may not be a revolutionary game, but it feels and plays very well, especially if you're a fan of the horror genre. The game won't make you rich quickly but it should provide a lot of entertainment and some pretty nice payouts along the way. You can expect to find Dracula at Wazdan-powered online casinos.