Sticky Bandits is a New Western Slot from Quickspin 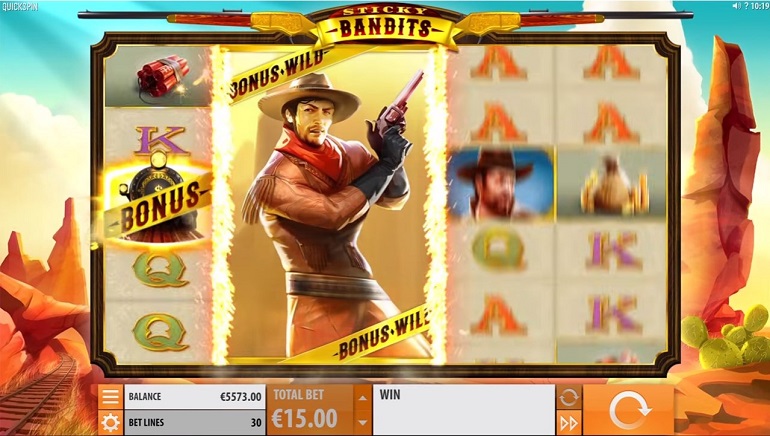 Plot a great train robbery with the Sticky Bandits in this new western slot that’s playable now at Quickspin casinos.

Fans of the hilarious Home Alone movie series will recognise “The Stick Bandits” as being the two main bad guys. Now, though, the moniker is instead being used as the title for an action-packed western slot. Developed by Quickspin, the slot is designed to offer a thrilling ride through the all-time favourite tropes of western movies and lore.

The Sticky Bandits will explore familiar territory, with slot developer Quickspin crafting a storyline that will see the troublesome cowboys attempt to rob a runaway train. Quickspin has delivered bright skies and barren desert landscapes in designing the game, while the soundtrack has been composed by drawing inspiration from spaghetti western music.

Sticky Bandits will also offer an innovative slot interface that adds two addition rows to the traditional structure of five reels by three rows. Overall, this has enabled Quickspin to provide a slot screen that is capable of landing 25 symbols on each spin. This is intended to open up all new opportunities to win on 30 fixed paylines.

The wild symbols serve a dual purpose in that they are also intended to be the bonus symbols of the Sticky Bandits slot. By landing a wild symbol on the first reel plus either the second or the fourth, this will cause seven free spins to be granted to the player.

Sticky Bandits is live now at Quickspin online casinos and will also include the developer’s Achievements Engine. This is a cutting-edge feature that will devise in-game tasks for the player to complete. The completion of tasks will result in tokens being awarded that can be cashed in at a later stage.