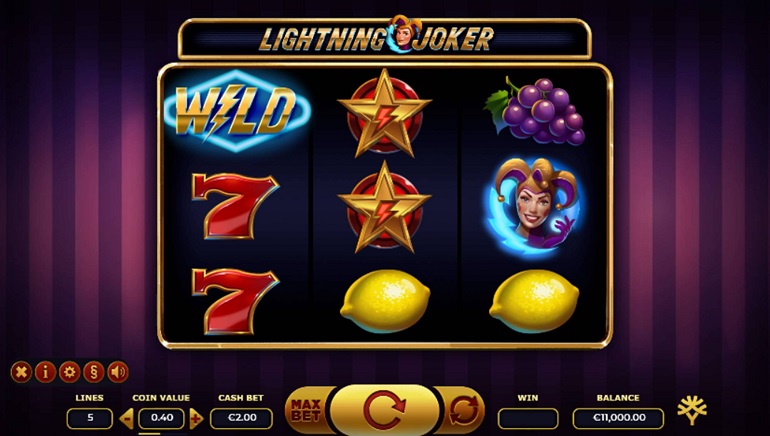 Lightning Joker is a new 3-reel slot from Yggdrasil where classic fruit symbols share space with a high-paying Joker, worth up to 10,000x the stake.

Classic images of fruit, bells, and red 7s join a smiling jester on the reels of the Lightning Joker slot from Yggdrasil. It's a brand-new addition to their Joker series and offers players the chance to land wins of up to 10,000x the stake.

It's a 3-reel, 5-line game that presents the symbols in a realistic style. Bolts of lightning envelop symbols when they match across the reels for a win, helped by the wild that can act as others if needed.

Players who fill 2 reels with matching symbols, or the wild, can see them lock in place for a Rapid Respin. The other reel spins again, giving a second chance to land a win across the game. The Lightning Strike feature triggers when all 9 positions fill with the same symbol. It randomly boosts the win by up to 10x.

The greatest rewards are claimed when the Joker appears. This cheerful character pays out Mystery Wins of between 2x and 10,000x the total stake when she lands in any 2 places. The prize for filling a payline with the Joker varies from 1,000x to 10,000x.

Lightning Joker is the first Yggdrasil online slot to feature Turbo mode. It sees the reels come to a stop as fast as the internet connection will allow, adding to the excitement of the gameplay.

This is a highly volatile slot, with an average RTP of 96.3%. It's available to play across desktop and mobile platforms for stakes between 0.05 and 50.00 per spin. That equals a highest prize of 500,000.00 at the maximum stakes.

Jonas Strandman, Senior Product Strategist at Yggdrasil, said: “Lightning Joker is an electrifying and innovative addition to our slot portfolio, while also continuing our exciting and hugely successful Joker series of games. The simple and elegant yet fast gameplay, teamed with plenty of features, means players are in for a thrilling time as wins crash down and light up the reels.”