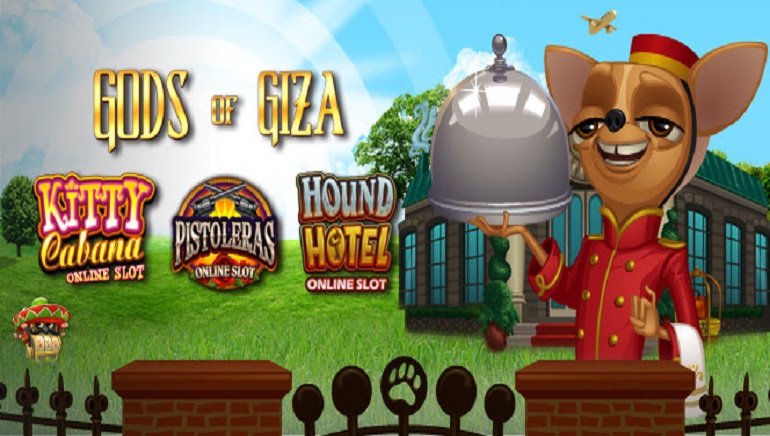 BETAT has added four new games and three new deposit methods, while it's sister-casino Slotty Vegas is getting ready for summer with its famous Hall of Champions Tournament.

BETAT Casino knows that during these sweltering summer days, it can be too hot to go outside! Which is why they’ve added a host of new games to their site, to make sure that you can have as much fun inside as possible! New BETAT games include Gods of Giza, Kitty Cabana, Hound Hotel, Pistoleras - a variety of themes for everyone.

This Genesis Gaming slot takes you back to ancient Egypt, an era that is full of mystery and treasure, both of which come alive on the screen in this slot game. Gods of Giza has 4 reels, 20 paylines, a free spins bonus game, and fun Egyptian-y music, so don’t be surprised if you start to walk like an Egyptian after playing this game!

Kitty Cabana is a game for cat-lovers, with felines decorating the reels and background of this Microgaming creation. Kitty Cabana is a 5-reel, 25-payline slot that includes Wilds, Free Spins and lots of feline fun.

Just so dog-lovers wouldn’t feel left out, BETAT has added a game for them too! Hound Hotel is also a 5-reel, 25-payline MicroGaming slot, with money-making features such as Wilds, Scatters, Free Spins and Multipliers.

Who doesn’t love a good cowgirl caper? Players will love the Wild West theme of this Microgaming slot, which comes along with 5 reels, 25 paylines, a Bonus Game, Wilds, Scatters and Free Spins.

In addition to these four new gems, BETAT has also added three new banking methods, which make it easier than ever to deposit and play your favorite games this summer. BETAT’s new deposit methods include internationally-recognized PugglePay, Poli Internet Banking, and entercash.

Slotty Vegas, an online slot-lovers haven, created by the owners of BETAT, is launching its Hall of Champions Tournament this summer, which means that players will be able to compete against each other for awesome cash prizes and free spins. Slotty Vegas is further improving upon itself with an upgraded version of their Supercharged™ system, which will now compensate players in real time.