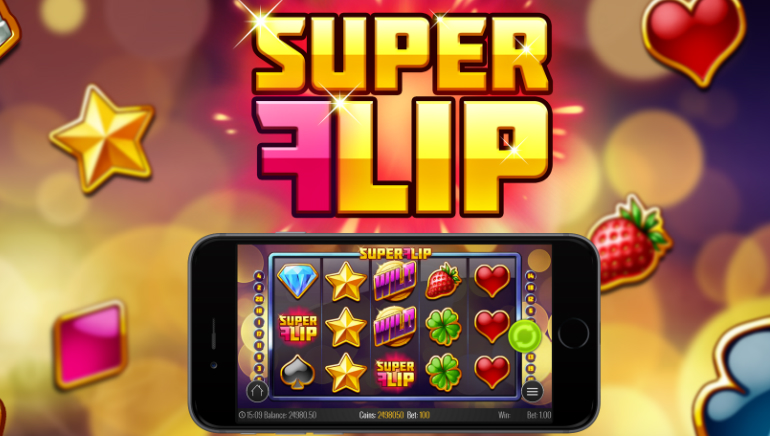 Super Flip is a stylish new video slot developed by Play’n GO, featuring crisp visuals and funky music as part of an experience that can be enjoyed on desktop and mobile. Gamers can try it from September 2016 by visiting leading Play’n GO casinos like Cherry Casino, Vegas Casino, and Video Slots Casino.

In Super Flip, players will encounter an array of classic slot symbols, including diamonds, stars, lucky horseshoes, and four-leaf clovers, with playing card symbols also included. Each symbol has been designed with a chunky style that uses bright colours. To win using the symbols, players can spin the five reels to line up matches on the 20 adjustable paylines.

Being able to change the active paylines will give players closer control of their wagering, as will the ability to stake between €0.01 and €1.00 in the coin value, with up to five coins permitted. At the most, Super Flip will enable wagers of up to €100 per spin.

Super Flip is a game that can also help players when they do not win. For instance, there is the chance for a re-spin on the middle reel when players land the same symbol in all positions on the first and second reels. But the major appeal of Super Flip is that players can win up to 1,000,000 coins, with five of the diamond or wild symbols triggering a 250x multiplier.

Five scatter symbols can also trigger a 250x multiplier, while three or more scatters will have the ability to trigger 15 free spins. At maximum, it is possible to re-trigger up to 90 free spins. The added advantage of the free spins round is that the reels are flipped around, with the last reel switching for the first and the fourth for the second, making it easier to win.