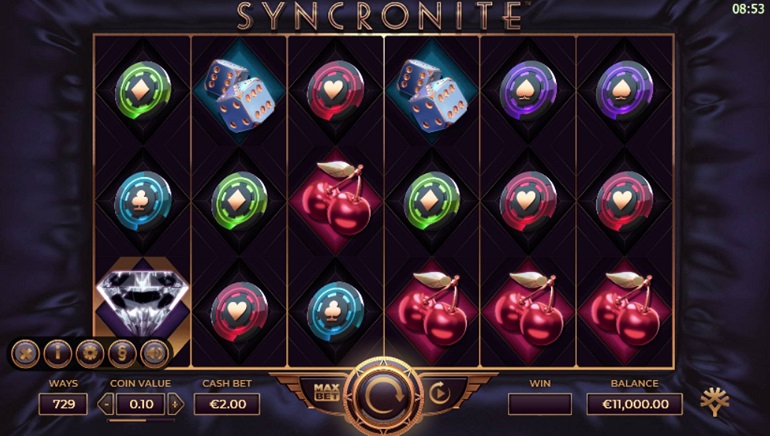 Syncronite Splitz is a November 2020 release from Yggdrasil Gaming that can yield up to 21,168 ways of winning when the symbols start to split.

Syncronite Splitz is a new video slot that has been released by Yggdrasil Gaming across participating casino sites. With the Syncronite Splitz slot releasing in November 2020, it comes in the wake of other successful launches, including Hyper Burst, Rock the Cash Bar, Valley of the Gods 2, and Medusa: Fortune & Glory.

Starting with the technical details, Syncronite Splitz has been made with an initial layout of six reels and three rows. As for the return to player (RTP), the slot can be graded with 96.00%. It has also been defined as highly volatile and been given the potential to release a maximum win of €1.28 million.

Syncronite Splitz is functional on desktop PCs and laptops to include Windows and MacOS, while mobile compatibility has been secured for Android and iOS. When accessing the slot, it can be displayed in the 16:9 resolution when played from the Google Chrome, Mozilla Firefox, Apple Safari, and Internet Explorer web browsers.

With the Syncronite feature, two or more adjacent reels can become synchronised and yield collective winnings. By design, the synchronised reels can result in matching symbols appearing and spinning in unison on up to six reels.

In Syncronite, the winnings are calculated when players can align symbols in adjacent reels from the left to the right of the slot interface. However, with the inclusion of the Splitz mechanic, there are special symbols that can be divided into up to eight identical images. This is what gives Syncronite the potential to have 21,168 ways of winning.