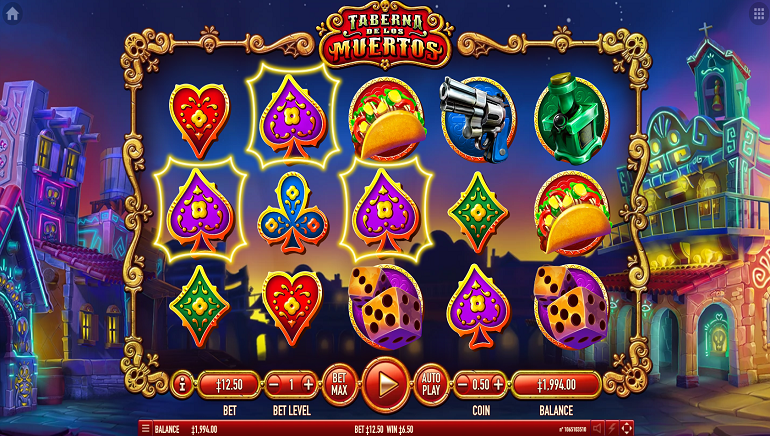 Taberna de los Muertos is a new slot from Habanero Systems that has been launched in celebration of the Day of the Dead.

Dia de los Muertos – or Day of the Dead – is a Mexican holiday that is celebrated annually from 1-2 November. Arriving in time for the 2020 celebrations is the newly released Taberna de los Muertos slot from Habanero Systems, which has also produced an Ultra version with higher volatility.

The setting of Taberna de los Muertos is a neon-lit street where the sun is setting and the stars are emerging for the night. Presented in front of the background is a transparent slot interface that  Habanero has constructed with five reels and three rows. The wagering level goes from one to 10 and the coin value can rise from 0.01 to 20.00, depending on the jurisdiction.

The low-win symbols consist of playing cards, whereas the high-values ones express greater flair, having been designed based on dice, bottles, tacos, and guns. When it comes to matching the symbols, Taberna de los Muertos has 25 fixed paylines that can pay from left to right across the reels.

The wild symbols are among the most rewarding and can trigger high payouts when matched together rather than acting as a substitute, which is the secondary function. The more valuable wild symbols can appear on reels one, three, and five during free spins.

Any users seeking to trigger free spins will need at least three scatter symbols to land during gameplay. The minimum number of free spins is 10, though Taberna de los Muertos can provide 40 if five scatters are landed. To continue the feature, users can land three or more scatters for another 10 spins with double winnings provided.

When free spins commence, the paylines start on 25. However, it can be possible to win on specified pay lines and increase their overall number. Ultimately, Taberna de los Muertos can be transformed by the Line Boost feature to display 101 paylines.