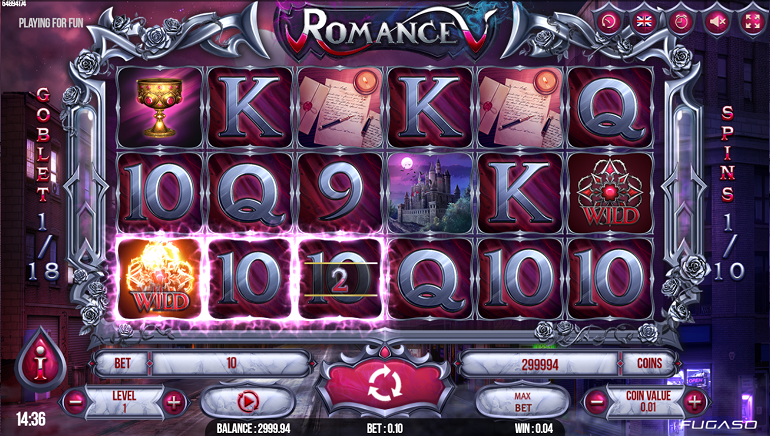 Attractive vampires and their human victims appear on the 6 reels of Romance V, the latest online slot from Fugaso. High quality graphics bring these characters to PCs and mobiles, and it comes packed with special features to give it some bite.

The 6 reels with their 10 paylines sit against the backdrop of city streets, lit up by a full moon. Silver-effect playing card symbol appear, along with a Gothic castle, 2 humans, 2 vampires, and a golden goblet. Spins play out in batches of 10, with a counter tracking progress from 1 to 10.

During each batch, players collect goblets in a meter to the side of the reels, and at the end, all goblets get placed onto random positions on the game as wild symbols that can help complete combinations by acting as any others. It's possible to collect up to 18 goblets in a series of 10 spins, filling the reels with valuable wilds. If players change their bet level during a run of 10 spins, the progress is saved and the spin counter reset to 1.

The Romance V slot also has a free spins bonus round that begins when both types of humans and vampires land next to each other. Depending on which characters triggered the feature, players get 14 free spins with all wins multiplied by 2x, or 7 spins with a 4x multiplier applied to all wins. A wild is placed on reels 3 and 4 throughout the free games, and a win both ways mechanism is active during the round.

Romance V is a high volatility slot with average returns of 96% and it comes with a theoretical maximum win of 20,250x the total bet, or 405,000.00 at the highest level. Players can select stakes from just 0.10 to 20.00 per spin and it's fully compatible with iOS, Android, and Windows, as well as PCs.