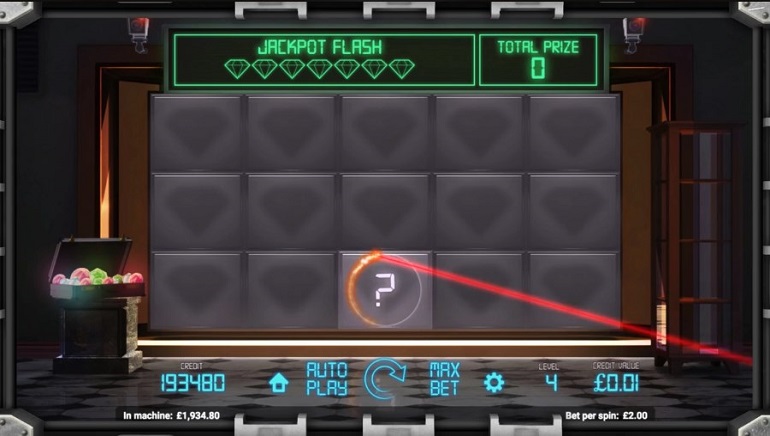 Jewel Heist is new for March 2018 and comes with two progressive jackpots and three bonus games – get all of the key slot details here.

Ocean’s Eleven and The Thomas Crown Affair are just two of the many movies that have glamourised the idea of stealing jewels in highly stylised heists. And it would appear that Magnet Gaming has drawn inspiration from those flicks in the development of a newly released slot called Jewel Heist, which is playable from March 2018 at Magnet Gaming online casinos.

Jewel Heist stars a mysterious thief named Julie, who uses her dexterity to traverse laser-guarded hallways and state-of-the-art security systems. And those are just two of the visual elements that have been intergated into Jewel Heist as part of making the slot feel like a robbery theme.

On the technical aspects, Magnet has designed Jewel Heist so that the slot uses five reels and three rows. The slot can then offer a 96.50% return to player (RTP) percentage, which comes into play when matching symbols on the 17 paylines. At all times, the paylines are fixed, but can pay out both ways, with 400x multipliers winnable in the base game.

What has also emerged is that Magnet’s Jewel Heist slot will feature two progressive jackpots, including a standard and a super pot. Magnet has also designed three bonus games that can be triggered in different ways. These include the Break-In, Heist, and Game Chance phases of the Jewel Heist that is planned.

For accessiblity, Magnet has designed Jewel Heist as an omni-channel game. As a result, players should expect access over a wide array of smartphones, tablets, and desktop devices, including Windows, Android, and Apple/iOS ad some of the most notable operating systems.