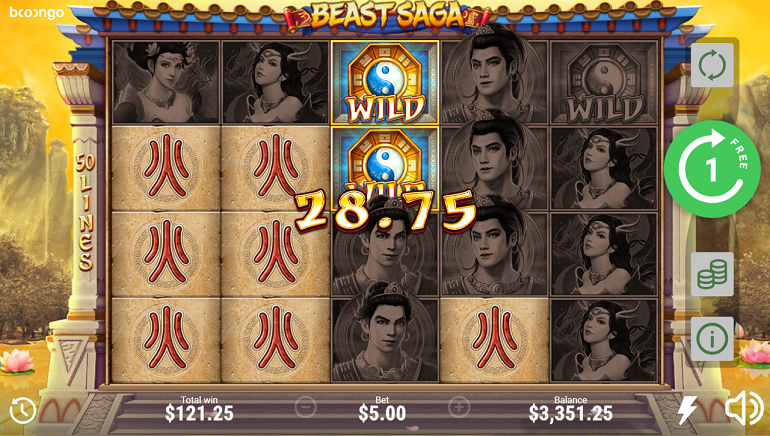 Beast Saga is a new slot from Booongo with an ancient Chinese setting. Players can unlock extra rows of symbols during a free spins bonus round.

A richly decorated temple is the setting for the Beast Saga slot machine that's new from Booongo. The colourful symbols include letters, several characters, dragons, and the Yin Yang emblem which can act as others if needed.

Symbols can appear stacked on any of the 5 reels, helping to complete combinations across the 50 paylines. Bonus features include a free games round where all symbols will stack up to bring in extra wins.

Beast Saga is a PC and mobile compatible game that has realistic graphics and an Asian-inspired soundtrack to compliment the visuals. Players will need 3, 4, or 5 matched symbols across a line to win. The dragon is a powerful symbol that pays 10x the stake when it fills a line.

Although it only appears on the middle 3 reels, the gold-framed Yin Yang symbol is capable of creating more wins when it substitutes for others. It can't replace the multicoloured scatter symbol, as this icon is key to unlocking 10 free spins when it's seen in at least 3 places at once. Excitement builds during the bonus games as stacked reels can bring in some big rewards.

Beast Saga joins a growing portfolio of slots from Booongo, with titles such as Sun of Egypt 2 already proving to be extremely popular at online and mobile sites carrying this range.

Commenting on their latest release, Yuriy Muratov, Head of Account Management and Business Development at Booongo, said: “Creating quality diverse titles is vitally important in our design process and we’re thrilled to meet our expectations with the launch Beast Saga.

“Within its beautifully crafted setting, stacked symbols mean any spin can lead to a lucrative win and the mystical Beast rewards players upon the reels. We look forward to seeing how our latest release is received by our customers and fans alike.”