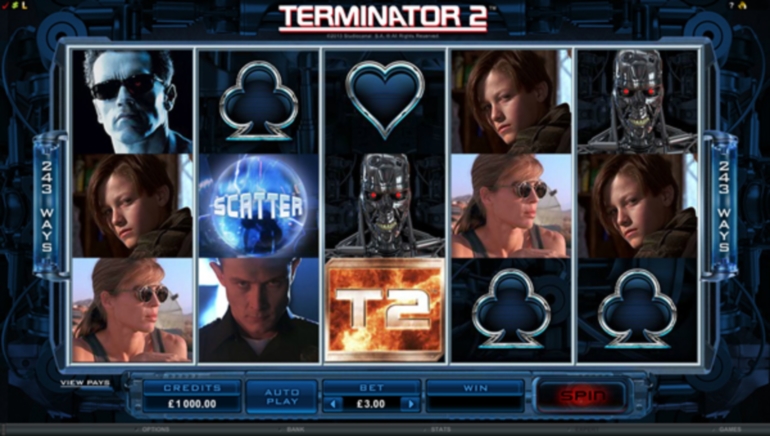 Terminator 2, the highly anticipated video slot from Microgaming, has been launched in All Slots Casino. Terminator 2 is a 243-ways-to-win video slot themed on the 1991 award winning blockbuster film directed by James Cameron and starred by Arnold Schwarzenegger. The game was created in partnership with StudioCanal which produced the original picture, and it breathes new air into the movie which has become a cult-classic throughout the years, featuring the iconic original soundtrack and main characters such as John and Sarah Connor, T-800 and T-1000 represented as symbols.

The Terminator 2 video slot brings the movie's groundbreaking visual effects in their full splendor with explosive live action on the reels, featuring some of the film's unforgettable scenes. Following the movie, the storyline revolves around the battle between the two cyborgs T-800 and T-1000 on the fate of future human resistance leader, John Connor.

The explosive fight between the two cyborgs comes into life with the slot's unique bonus modes: The T-800 Vision mode gets triggered randomly on non-winning spins, throwing random bonuses at players with the added option of triggering 10 free spins. With only one scatter symbol, the Vision mode can put the slot into a 1,024 ways to win free spin mode, when another full row is added to the reels.

During this mode, players can trigger the T-1000 Transform feature based on the evil cyborg's eerie metallic transforming abilities: On the reels, it acts as a special substitute which morphs into other character symbols to complete winning combinations and give max payouts. The slot's top payout is a whopping $400,000.