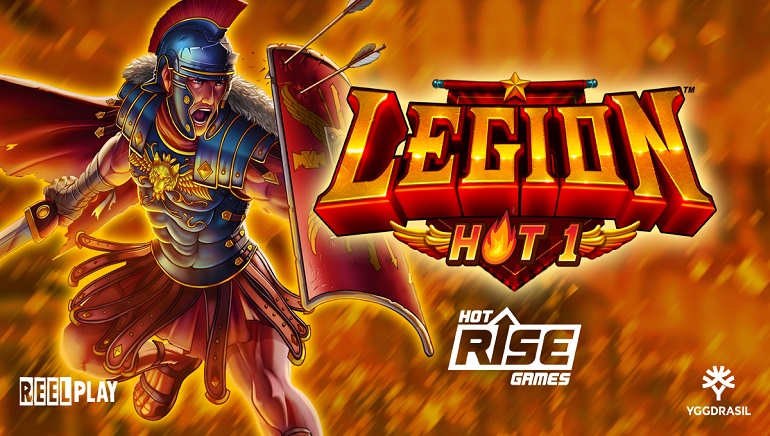 Legion- Hot 1 is a new slot from Yggdrasil, ReelPlay, and their new Hot Rise studio. Players collect shields for upgrades and to unlock free games.

Legion - Hot 1 is a new slot with a Roman theme that plays out on a starting grid of 5 reels and 243 ways to win. Players collect shields for upgrades such as expanded reels with extra ways to win, multipliers, and free games. It comes from Yggdrasil and ReelPlay, and the new Hot Rise Games studio.

Join The March For Winning Spins

Rolling countryside sits behind the 5x3 symbol grid. Axes, lion heads, and playing card symbols are among the images on the reels, along with a wild legionnaire and shields.

The shields unlock rows above and below the reels, and once opened, these extra positions remain active, as more shields, extend the reels, and add 2x multipliers. Once 4 shields have landed on a reel, players trigger a free spins bonus round.

10 extra games play out, with multiplier wilds, and the final spin is called the 'Hot 1', where sticky wild multipliers are active on the top and bottom rows of a random reel.

Legion - Hot 1 is a desktop and mobile slot with a low volatility. A bet range of 0.3 to 90.00 per spin can be increased in some jurisdictions with a Bonus Buy option.

It's available via the YG Masters program and powered by Yggdrasil's GATI software that allows casino operators to easily integrate their games.

Stuart McCarthy, Head of Product and Programs at Yggdrasil, said: “Legion – Hot 1 transports players back to Rome’s glory days where the brave legionaries fight to protect the Empire. The game builds momentum as it gears up to the battle during free spins, offering players true excitement and thrills and spills.

“ReelPlay and their partner studios are rapidly creating and releasing premium content via the YG Masters program and their games have been huge hits with players so far. I expect Hot Rise Games’ Legion – Hot 1™ to continue that trend.”