The Champions Slot is New to Pragmatic Play Casinos 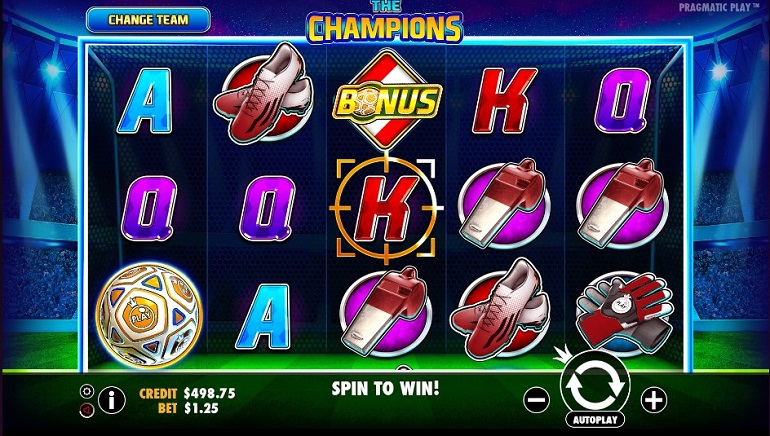 Pragmatic Play has just brought out The Champions, which is a new football slot to celebrate the 2018 World Cup.

The 2018 World Cup starts on 14 June and Pragmatic Play has just released a slot to accompany the tournament. As of right now, players can visit Pragmatic Play casinos to play The Champions slot, which has been developed in celebration of the world’s most famous football tournament.

In the beginning, players are invited to select their favourite team from one of the 32 nations competing at the 2018 World Cup. If players struggle to choose, then they can instead click the randomise button. The chosen team will then be reflected on the colours of some of the symbols.

An array of whistles, jerseys, boots, gloves, and balls have been assigned as the symbols that can be spun over the five reels and three rows of the slot infrastructure. As players spin the reels, there challenge will be to align symbols over the 25 fixed paylines. When wagering, players can assign from one to 10 coins per payline, while the coin value goes from €0.01 to €0.50.

The Champions slot also lets players click or tap on the symbol positions to assign an overlaid target, which is known as the Momentum Progressive Game. This will then come into play whenever the ball symbol lands in the target position after a spin.

As a result, players will score a goal and move up a level and receive multiplier for their next 10 spins. If players score another goal, then they can rise up through the levels until the maximum threshold of 11. At that point, the multipliers will have been doubled all the way up to 20x.

The Champions also features wild symbols, but these cannot substitute for the bonus symbols. And the appeal of the bonus symbols is that players can use them in order to launch the Penalty Shots Bonus Game.

After gaining three or more bonus symbols on the second, third, or fourth reels, players get to take five penalty shots to try and lead their team to glory. The minimum reward is a 5x multiplier, but the maximum can be 100x if all penalties are scored.