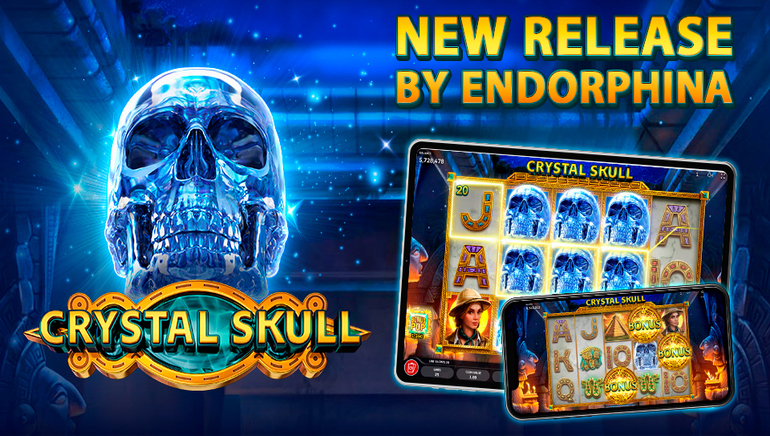 Endorphina has unveiled its latest adventure slot called Crystal Skull, with mighty wilds and scatter symbols, a Classic Risk Game, and a Treasure Hunt Bonus round.

Endorphina marks the final week of autumn with a fantastic game that is available at top online casinos. If you have an account at one of the gambling operators powered by this leading software developer, you will enjoy spinning the reels of Crystal Skull. This is a modern adventure slot that checks all the important boxes that are game must have the be popular with a broad audience.

Uncover the Secrets of the Crystal Skull

Endorphina has a fantastic selection of adventure slots, but the latest release stands out from the crowd with amazing graphics and gameplay. Players are supposed to embark on an epic quest and solve the riddles to receive a gorgeous artifact from an antique dealer. Each of the skulls is special because they are imbued with mysterious properties that can produce wealth beyond your wildest dreams. The slot has a pretty standard configuration, with three rows, five reels, and a total of 25 pay lines.

Across the reels, players will discover various symbols inspired by the ancient Mayan civilization. The wild symbol is the most powerful one and not surprisingly, it is depicted by a crystal skull that can appear on the second, third and fourth reels. When it pops up, it expands vertically and it is used to create winning combinations with other symbols. The scatter symbol is an equally powerful one and in combination with the wild, it creates winning ways for the benefit of players. The only difference is that when the two symbols interact, the wild will only substitute one scatter per reel.

Three scatters are needed to trigger the Bonus Game Wheel of Fortune which sends a lucky wheel in motion. The results vary from multipliers of up to 25 times the bet, or the bonus section can activate the Treasure Hunt Bonus. During this bonus game, punters interact with five levels of five stone skulls hiding treasures or snakes. Punters try to unveil as many wins as possible but sadly, you can’t win the bonus once more during this special feature.

Endorphina has loaded the Crystal Skull slot with cool features, including the Classic Risk Game. This enables punters to risk the winnings secured so far for the chance to double them. When this feature is active, you can hope to win up to 10 times the amount, but it is not suitable for risk-averse punters. The slot also features the Bonus Pop, which greatly spices up the standard gameplay.