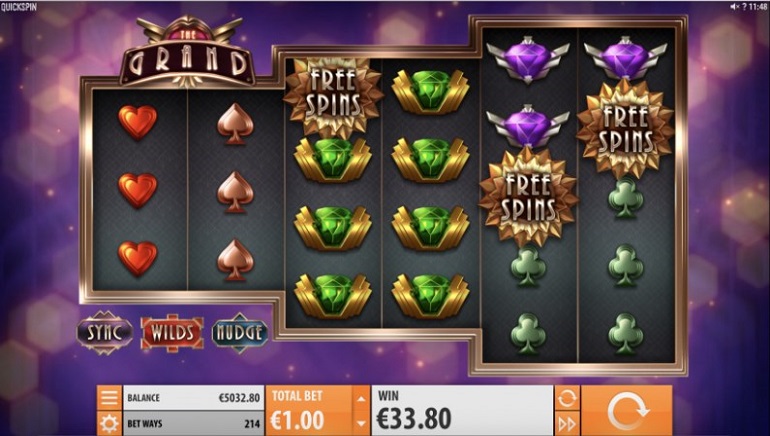 The Great Gatsby has inspired the development of The Grand slot from Quickspin. Key features include Synched Reels, Random Wilds, and Nudge Reels.

The Grand is a brand new slot game that is playable at Quickspin casinos from 12 March 2019. Quickspin has openly cited 1925 novel The Great Gatsby as inspiration for the slot, which has utilised an art-deco style that aims to evoke comparisons with the Golden Age of Hollywood and the Roaring ‘20s.

Quickspin has ambitiously played with the interface of The Grand by designing six reels. On reels one and two, there are three rows. Reels three and four have four rows, while the fifth and six reels have five rows where symbols can appear.

Random Wilds will then provide players with an opportunity for substitute symbols to land anywhere unexpectedly. Quickspin has made it possible for players to gain four to eight wild symbols at random. Notably, however, the random wilds are not able to cover other wilds or free spin symbols.

One of the Synched Reels, Random Wilds, and Nudge Reels features can be unlocked by reaching the GRANDomizer with three bonus symbols. Meanwhile, there are also free spins symbols, with only three or more needed in order for players to benefit.